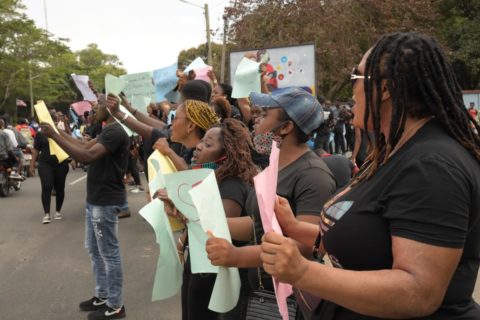 ARTICLE 19 strongly denounces the use of tear gas against the peaceful anti-rape protesters in Monrovia on 27 August while they were attempting to present a petition to the President Weah.

Since 25 August, hundreds of protesters have taken the streets of Monrovia to protest against the alarming increase in reported rape cases in Liberia. Protesters asked President George Weah to receive their petition which contains suggestions to address the situation. On the second day,  there was violence as some unidentified persons disrupted the protest.  They forced their way through a blockade set up by the protestors in front of the Ministry of Foreign Affairs, which currently hosts the offices of President. On the third day of the protest, police dispersed the protesters with tear gas.

“Protest is a right. The police have no reason to use any force against peaceful protesters. Instead, the government must listen to the women’s voices and take decisive action to end the shocking cycle of rape against women and girls in the country”, stated Fatou Jagne Senghore, Regional Director of ARTICLE 19 WEST AFRICA.

President George Weah disapproved the use of force by the police and expressed his concern about the increase of cases of rape in the country, but also criticized violence amongst the protesters.

ARTICLE 19 welcomes the condemnations by President Weah and urges him to take decisive actions to ensure that adequate preventive and remedial mechanisms are in place to protect women and girls. We further call on the Liberian Government to demonstrate these condemnations are followed by commitment to ensuring all allegations of rape are investigated and suspected perpetrators brought to justice in fair trials. The government should also ratify the Optional Protocol to the Convention on the Elimination of All Forms of Discrimination Against Women (CEDAW).

ARTICLE 19 interviewed some activists who attended the protests, and all confirmed the protests were peaceful. Among them, a woman activist and blogger told to ARTICLE 19:

“We strongly condemn the violence by the police, who refused to stand in solidarity with us as we protest peacefully against a mutual enemy [rape] and we are frustrated, disappointed and sad after being physically harmed, chased and threatened.”

“At the same time, it comes as no surprise because a police officer is currently on the run after raping an under-aged child in Liberia. Something must be done, and the government must work with us instead of being egoistic and terming our peaceful protest as a ‘political’.”

The police failed to protect people who were demonstrating peacefully in violation of the right to free assembly. Indeed, according to the Guidelines for the Policing of Assemblies by Law Enforcement Officials in Africa, the police can only use force when strictly necessary and to the extent required for the performance of their duty, after all other means of de-escalation and preventing further violence have been exhausted. The dispersing of protests should only be done as a measure of last resort. Tear gas may only be used to disperse a crowd when there is more generalised violence, due to its indiscriminate effects and high potential of harm.

“The use of force to disperse the protesters was not justified. The police should have facilitated this peaceful protest and protect those who were exercising their right to protest. Whenever they attend a protest, the police should be guided by the presumption of peacefulness, rather than assuming there will be violence and resort to using force”, reminded Fatou Jagne Senghore

According to the Ministry of Gender’s statistics quoted by local media, in the first five months  of 2020, more than 600 cases of rape were reported. There was a clear increase following the outbreak of the Coronavirus pandemic. Given to the magnitude of this scourge, the anti-rape march mobilised several stakeholders including youth movements, women groups, activists, and others.

Denouncing the alarming cases of rape, a man who joined the protest pointed out to Article 19 that:

“We as Liberians are all concerned with the high increase of rape cases each and every day in the country. We can’t continue to live in fear as always. We need justice for the victims of rape in our country. We want the president of the Republic of Liberia Dr. George M. Weah to declare rape as National Emergency”.

The media appears to be determined to report about the activism throughout the country. The president of the Press Union of Liberia told ARTICLE 19:

“The disruption of the protest against rape is unacceptable. We urge the authorities to ensure the safety of the peaceful protesters. We also condemn the increase of rape in the country. We are determined to take up the fight and make women’s voices heard”.

ARTICLE 19 urges Liberia to make public steps taken to address sexual and gender based violence, which must include the recommendations it committed to during the last UPR session in 2015, investigations and prosecution of rape perpetrators and other prevention measures. The authorities should also investigate the use of force and tear gas during last week’s protests and take measures against those who are suspected of ordering or using excessive force.