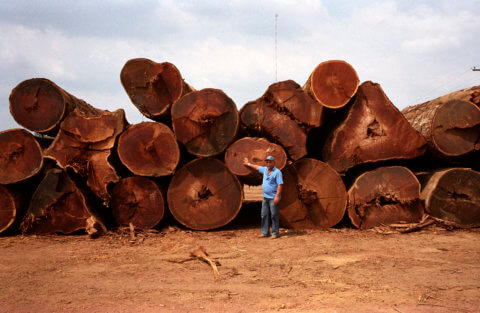 A member of a local timber union inspects the trees that were logged down in a farm in south Para.

Today, the Principle 10 agreement, which establishes binding rules for access to information, access to justice, and social participation in environmental issues in Latin America, opens for signature at the UN General Assembly in New York, US. Named the Escazu Agreement after the province in which it was approved, the treaty represents a groundbreaking step forward for protecting the right to information, the environment, and environmental human rights defenders (EHRDs) in the region. ARTICLE 19 urges all 33 countries in the region to sign and ratify the treaty without delay.

The agreement must be ratified by 11 countries in order to come into force, after which it will be binding for ratifying states. UN human rights experts have urged States to sign and ratify as quickly as possible, to “reinforce their commitment to environmental protection and human rights and, above all, … send out an unequivocal message in favour of multilateralism, solidarity, equality and regional integration, while encouraging partnerships with other regions”.

The Escazu Agreement is especially important for protecting human rights defenders, as it is the first international treaty that determines specific actions to be carried out by states, aimed to protect EHRDs. According to the treaty, states must adopt measures to hold perpetrators of attacks against EHRDs accountable, and take active steps to ensure a safe enviroment for them. This provision is essential in a region that has seen a number of high profile killings of environmental human rights defenders in recent years, with 57 EHRDs killed in Brazil in 2017 alone. EHRDs face threats from businesses, organised crime and state security forces, and the Principle 10 agreement will create much needed obligations on states to do more to protect them and tackle impunity.

The agreement also makes clear who is obliged to provide information on environmental issues; it includes not only public agencies, but also private companies receiving public funds or performing public functions. It also requires state parties to ensure the public’s right to participation and, for that purpose, commits to implement open and inclusive participation in environmental decision-making processes based on domestic and international normative frameworks. To achieve this participation, the agreement includes practical measures, such as local language assistance in participatory processes.

Together with other regional civil society organisations, ARTICLE 19 has followed the negotiations closely, and believes the agreement could provide an important instrument for reversing serious environmental problems in the region, as well as tackling participation and protection issues related to the environment. We urge Latin American states to show their commitment to reversing these problems and improving access to information by not only ratifying the treaty, but ensuring it is effectively implemented across the region.