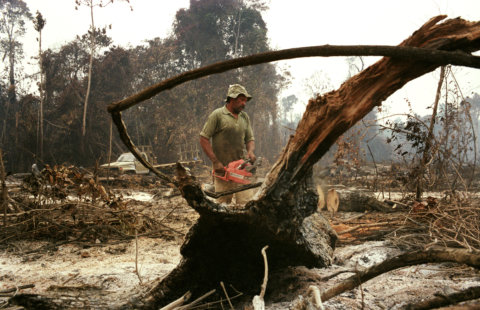 An area of deforestation on the border of the Amazon rainforest burned down to produce charcoal and to grow soybeans or raise cattle. The Ministry of Labour's grupo movel (mobile unit), who work to end the use of unfree labour in the region, are developing a pioneering activity to assign responsibility for the slavery cases reported on such farms to the pig iron producing companies, as the charcoal is made to be sold exclusively to these extremely profitable companies.

After more than six years and eight international meetings, negotiations on an agreement for the implementation of Principle 10 of the Rio Declaration on Environment and Development in Latin America and the Caribbean have reached the final stage.

Principle 10 is one of the 27 principles contained in the final document of the UN Conference on Environment and Development held in Rio de Janeiro in 1992. It establishes the commitment of governments to guarantee citizens’ social participation, access to information and access to justice in environmental matters.

On 28 February 2018, representatives of governments and civil society from 24 countries in the region will be in San Jose, Costa Rica, for the ninth and final meeting of the process that aims to define common parameters for the implementation of Principle 10. Negotiations will finish March 4.

The meeting aims to conclude negotiations for the agreement but the biggest question remains whether or not the agreement will be legally binding.

Together with regional civil society and environmental organisations, ARTICLE 19 has launched a petition to collect signatures of organisations and individuals that will be delivered to the governments of Brazil and Argentina to pressure them to speak out in favour of a binding agreement. The petition gathered 581 signatures, of which 481 were individuals and 180 were organisations.

The severe and increasing environmental problems that afflict Latin American and Caribbean countries including droughts, water crises, climate change and deforestation demand that the three pillars of Principle 10: social participation, access to information and access to justice, be effectively applied by governments in the region. But this will only be possible if it is agreed in the negotiations that Principle 10 will be legally binding with law status.

Another point at stake in the Costa Rica meeting is the definition of mechanisms for monitoring the implementation of the agreement, such as a regular conference and the creation of a permanent committee for this purpose, and whether there will be public participation in these mechanisms.

ARTICLE 19, which has followed the negotiations since their inception in 2012, urge governments and civil society finalising the agreement to:

More information and access to view the event remotely can be found on the Principle 10 negotiations’ official webpage.