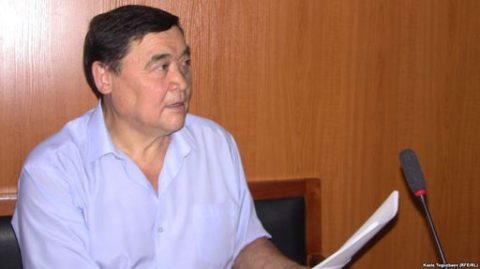 On 14 May, Ramazan Yesergepov, chairman of Journalists in Trouble, was stabbed on a train while travelling to Astana. ARTICLE 19 believes the attack to be politically-motivated and calls upon the authorities to immediately conduct a thorough and objective investigation into the incident and to take all necessary measures to bring Yesergepov’s attacker to justice.

Yesergepov, who is also an activist, journalist and prominent critic of the government of Kazakh President, Nursultan Nazarbayev, was in a passenger carriage when he was stabbed by an unidentified assailant. Yesergepov was taken to hospital from the next station where he underwent emergency surgery.

Yesergepov was travelling to Astana to meet with the Ambassador of Lithuania and other international experts to discuss the case of  Zhanbolat Mamay, editor-in chief of Sayasi Kalam Tribuna, an independent newspaper known for its reporting on politically sensitive topics, who was arrested on money laundering charges on 11 February 2017 and sentenced to two months pre-trial detention. Mamay’s detention was extended on 27 April and he is to remain in prison until his hearing which is scheduled for 10 June.[1]

Mamay is accused of using his newspaper to launder funds allegedly stolen from BTA Bank in 2005 – 2009, by Mukhtar Ablyazov, a Kazakh oligarch, in exile since 2009, known for his political opposition to the Kazakh government. Mamay has been charged under Article 193 (3b) of the old Criminal Code of Kazakhstan, “Legalization of Monetary Funds or Other Property Obtained Illegally” (money laundering), punishable by deprivation of liberty of up to seven years.

Yesergepov has long been subject to government pressure: in 2009, when working as editor of the newspaper Alma-Ata Info, he was sentenced to three years’ imprisonment on charges of having disclosed state secrets following publication of an article entitled “Who rules our country: the president or the KNB [National Security Service]?”.

Following his release from prison, Yesergepov became head of the Zhanaozen-2011 Committee[2], a group of civil society activists set up to monitor the trials of those accused of having organised the mass riots in Zhanaozen in December 2011, during which police shot into the crowd of protesters.[3] In 2012, Yesergepov became head of a civil society advocacy group, Journalists in Trouble, that provides support to journalists in crisis.

Kazakhstan is ranked 157 out of 180 countries in Reporters Without Borders’ 2017 World Press Freedom Index[4] and ‘Not Free’ in Freedom House’s Freedom of the Press 2017 report[5]. Since the closure of leading opposition media publications in December 2012 independent journalists who are critical of the Kazakh authorities are increasingly targeted and arrests are common.[6] Physical violence and threats against independent journalists and media outlets are a regular occurrence, according to a Freedom House report[7].