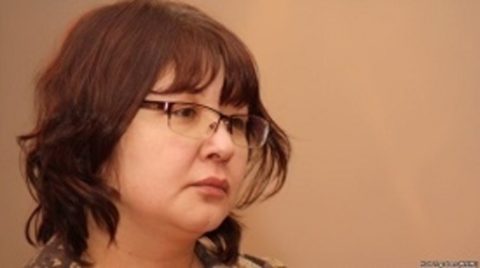 ARTICLE 19 condemns yesterday’s sentencing of Guzyal Baidalinova, the owner of the news website Nakanune.kz, to 1.5 years in prison on charges that violate international standards on freedom of expression, and calls for her immediate release. The charges are in connection with several articles published on the site alleging that Kazkommertsbank, a large Kazakh bank, was involved in corruption. The arrest forms part of a larger campaign waged by the authorities of Kazakhstan to silence independent and critical media.

“The sentencing of Guzyal Baidalinova, who heads one of the few remaining critical news outlets in Kazakhstan, represents yet another assault on independent media in Kazakhstan,” said Katie Morris, Head of Europe and Central Asia Programme at ARTICLE 19. “Baidalinova should be immediately released – journalists should never face criminal charges for undertaking legitimate journalistic activities,” she added.

On 23 May 2016, Guzyal Baidalinova was sentenced by the Almaty District Court to one and a half years of incarceration on charges of disseminating knowingly false information under Article 274 of the Criminal Code of the Republic of Kazakhstan. On June 19 2015, Baidalinova was ordered by the Medeu district court in Almaty to pay 20 million KZT (70,000 GBP) “in compensation for damage inflicted on the business reputation” of Kazkommertsbank JSC, following a civil lawsuit filed by the bank in relation to similar articles to those implicated in the criminal case.

The criminal charges stem from the publication of 40 articles about Kazkommertsbank JSC between April and December 2014. Baidalinova is alleged to have conspired to use media outlets and online portals, specifically www.respublika-kaz.info and nakanune.kz, to disseminate deliberately false material, which the prosecution claims undermined the bank’s reputation. Prior to the sentencing, Baidalinova had been held in pre-trial detention since 26 December 2015.

The charges against Baidalinova violate international standards on freedom of expression. Article 274, which prohibits the “knowing dissemination of false information that creates a risk of public disorder or substantial harm to the rights and legitimate interests of citizens or organisations or the legally protected interests of society or the state” effectively amounts to criminalisation of defamation. International bodies such as the UN and the OSCE have recognised the threat to freedom of expression posed by criminal defamation laws and have recommended that they should be abolished.

Moreover, the provision does not meet the requirement under international law that restrictions on freedom of expression must be formulated with sufficient precision to be understandable, so that people can regulate their conduct accordingly. Article 274 does not explain what is meant by “knowingly false information” and does not differentiate facts and value judgments; it allows for subjective interpretation that is open to abuse to suppress legitimate expression that the authorities simply disagree with. In this case, the authorities of Kazakhstan seem to be doing just that in order to silence one of the few remaining critical publications in the country.

Nakanune.kz is well-known for its investigative journalism around allegations of corruption between the authorities of Kazakhstan and the business elite and its outspoken criticism of the Government. A number of Nakanune.kz’s journalists worked previously with Respublika, an independent newspaper which was highly critical of the authorities of Kazakhstan, until its closure was forced in 2012, on charges of extremism. Following this, in April 2014, an Almaty court ruled that the Assandi Times, where a number of former Respublika journalists were working, was an affiliate of Respublika, and ordered its closure.  Respublika is now operating through a Russia-based site, Respublika-kaz.info. This site was implicated in the Nakanune.kg libel case, for having distributed the article in question.

In addition to the harassment and conviction of Baidalinova, the Kazakh authorities have also sought to intimidate other journalists working with the news site. On 18 December 2015 police searched the apartment of Nakanune.kz journalist Yulia Kozlova, before bringing dubious narcotics charges against her.  Fortunately, on 29 February 2016, Kozlova was acquitted by the Bostandyk district court in Almaty.

The incarceration of Guzyal Baidalinova represents yet another attack on independent media, in a country where dozens of independent and opposition media outlets have been closed over the past several years. We call upon the authorities of Kazakhstan to immediately and unconditionally release Baidalinova and to reform its legislation to bring it in line with its international commitments, as a signatory of the International Covenant on Civil and Political Rights, to uphold freedom of expression

Click here for further information on the case of Nakanune.kz.