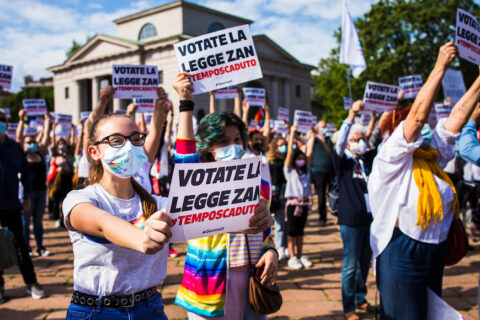 Protest in support of the bill that would grant more rights to greater numbers of people across Italy, 2021. Photo: SONIATAURINO /Shutterstock

On 27 October, the Italian Senate scrapped a Bill that would have extended protection against incitement to violence, violence and discrimination to LGBTQ people and people with disabilities, amongst others.

The “Zan Bill,” named after the MP Alessandro Zan who proposed it, aimed  to extend the protected characteristics in the crimes of violence, discrimination and incitement to violence and discrimination to sex, gender, gender identity, sexual orientation and disability. The motion against the Bill, approved by a 16-vote margin, means the Italian Penal Code only provides protection on the basis of race, ethnicity, nationality and religion.

The Bill had already undergone scrutiny by the Deputy Chambers earlier this year, and the latest move means it will likely not be passed if tabled again.

“With this vote, Italy loses a great opportunity to align to international standards on free expression, equality and non-discrimination,” said Maria Luisa Stasi, Senior Legal Officer at ARTICLE 19. “From the beginning, the legislative proposal has been harshly instrumentalised by the far right, who continuously misrepresented the provisions as a limit to free expression. Although there was some margin for improvement, there was no limit to this fundamental right in the wording of the Bill. Rather, it would have raised human rights standards and helped deliver a more tolerant and inclusive society.”

In July, ARTICLE 19 submitted an expert contribution to the Italian Senate on the Bill 2005 —  the Zan Bill – that would amend the Penal Code provisions on incitement and on violence and discrimination against protected categories. The submission analysed the compliance of key provisions of the Bill with international freedom of expression standards on hate speech and provided some key recommendations for legislators and enforcers.

Read the full submission in Italian