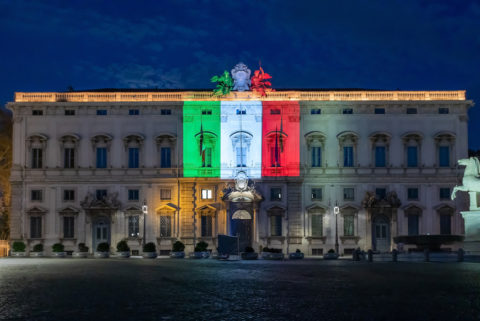 Colours of the Italian flag on the facade of the Palazzo della Consulta, Rome, Italy, 7 April 2020. Gennaro Leonardi/Shutterstock

A year after the Constitutional Court ruled on the question of unconstitutionality of prison sentences in cases of defamation through the press, on 22 June 2021 the Court issued a follow-up decision declaring art. 13 of Law 47/1948 (Press Law) not compliant with the Constitution. The Court has however declared art. 595(3) of the Penal Code, which provides for a sentence between six months and three years of prison or the payment of a fine, compliant with the Constitution, as it allows the judge to order the imprisonment only in cases of “exceptional severity”.

In June 2020, the Constitutional Court invited the Italian Parliament to remove specific provisions declared unconstitutional and promote a wider reform of the defamation framework. However, the Parliament did not meet the deadline set by the Court and failed to legislate on this matter, returning the decision to the judiciary. In its decision on 22 June 2021, in light of the lack of such initiative, the Court renewed its call on Parliament urging the promotion of a reform that could adequately balance the “freedom of expressing one’s own thought and (the) protection of individual reputation”. The lack of parliamentary initiative in pushing for comprehensive reform of the defamation framework in Italy is a long-standing issue that contributes to the erosion of a free and independent press and an increase in SLAPPs against journalists.

Data from Istat (Italian National Statistics Institute) shows that, in 2017 alone, a total of 9,479 proceedings for defamation were initiated against journalists, of which 60% were dismissed after preliminary investigation and 6.6% went to trial.1https://www.balcanicaucaso.org/ECPMF/ECPMF-news/Dossier-SLAPP-la-querela-che-minaccia-la-liberta-di-espressione-198695#5 Plaintiffs are often public figures – politicians, businessmen, or individuals involved in organized crime – who start legal proceedings against journalists with an aim to silence them and bury articles that often contain information on  corruption, tax evasion, or mafia collusion.

A reform of defamation laws is urgently needed to stop SLAPPs against journalists, which often lead to self-censorship and discourage newspapers and editors from publishing sensitive or controversial information for fear of incurring lengthy and expensive legal proceedings. The European Commission – aware of the need to counter this phenomenon within the EU – committed itself to promoting measures to counter SLAPPs within the EU block,2https://ec.europa.eu/commission/presscorner/detail/en/ip_20_2250 following a request of the Coalition Against SLAPPs in Europe, composed of 60 organizations in Europe, including the members of the Media Freedom Rapid Response.3https://www.article19.org/resources/eu-a-call-for-action-to-combat-slapps/ The European Parliament also recently took action against SLAPPs by promoting an “own-initiative report (INI)”, to be discussed on 28 June 2021, with an aim to push the Commission to adopt legislative measures to address SLAPPs.

The undersigned organisations urge the Italian Parliament to begin comprehensive reform of defamation laws in line with international freedom of expression standards as soon as possible. Such reform should center on the decriminalisation of defamation and set limits within civil law on the amount in damages that can be sought to avoid creating undue obstacles to the journalistic profession. Furthermore, this reform should address specific challenges posed by SLAPPs against journalists within the Italian framework. While the Italian Civil Procedural Code includes some provisions aimed at countering SLAPPs – art. 96 provides that those plaintiffs who filed a lawsuit in “bad faith” must compensate the defendant – judges rarely recur to this provision in practice.

We call on the Italian Parliament to prioritise the reform of both criminal and civil defamation laws, drive discussions that will lead to the identification of measures that address Italian issue areas, and establish a framework that will protect journalists from indiscriminate use of the law to silence or discredit.

This statement is part of the Media Freedom Rapid Response (MFRR), a Europe-wide mechanism, which tracks, monitors and responds to violations of press and media freedom in EU Member States and Candidate Countries. This project provides legal and practical support, public advocacy, and information to protect journalists and media workers. The MFRR is organised by an consortium led by the European Centre for Press and Media Freedom (ECPMF) including ARTICLE 19, the European Federation of Journalists (EFJ), Free Press Unlimited (FPU), the Institute for Applied Informatics at the University of Leipzig (InfAI), International Press Institute (IPI) and CCI/Osservatorio Balcani e Caucaso Transeuropa (OBCT). The project is co-funded by the European Commission.