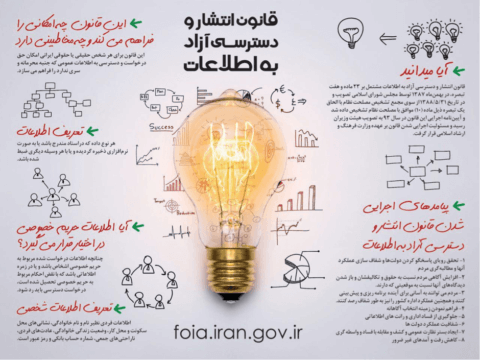 On International Day for Universal Access to Information, ARTICLE 19 renews its call on the Iranian authorities to review and revise the 2009 Publication and Free Access to Information Act (the Act) to bring it in line with international human rights standards. While we welcome the positive steps taken in clarifying the law’s provisions through ratification of directives, in its current form the Act fails to promote genuine transparency. Much more must be done to ensure that the right to information for all, as an integral part of the right to freedom of expression, is fully guaranteed in Iran.

“In recent years, pervasive corruption and a near total lack of transparency and accountability – among other things – has resulted in widespread discontent triggering nationwide protests. The people’s demand for transparency and an end to corruption is clear. It is high time for the Iranian authorities to improve the Free Information Act and to use it as a tool to ensure that people’s demands for transparency and accountability are fulfilled,” said Saloua Ghazouani, Director of ARTICLE19 Middle East and North Africa Programme.

The right to information is an essential tool for holding governments to account and building public trust, as it requires them to be more transparent in their activities, for example on how they spend public finances. This not only helps fight corruption, but it helps build stable and resilient democracies, where the powerful are genuinely accountable.

Under the Publication and Free Access to Information Act every Iranian citizen has a right to request information from public, private, and other institutions providing public services such as non-governmental organisations. All are obligated to provide the requested information within ten working days. However, the law imposes broad and vague exemptions to these obligations, meaning it is ineffective in key areas, and fails to meet international standards on guaranteeing this right.

Over the past two years, the Information Commission, the body mandated with the implementation of the Act, has drafted and passed nine directives, which, according to Hossein Entezami, the Secretary of the Commission, seek to clarify the content of the Act, provide guidance on points of ambiguity or where the Act is silent, and to ultimately facilitate the implementation of its provisions. These Directives, which are currently under review by ARTICLE 19 for their compliance with international law, address issues such as detection and separation of government secrets from public information, resolving disputes with regards to releasing information, and detection and separation of personal and private information from public information.[1]

The passage of these directives is a step in the right direction. However, major flaws in the Act remain unaddressed. Most importantly, the exemption clause that allows for refusal to release information on the grounds that it is classified remains overly broad and vague. Under Article 13 of the Act, the release of “classified” information is exempt, and under its 2014 bylaw, determination of what counts as “classified” is based on the archaic Secrets Act,[2] dating back to 1975 which defines secret information in vague and broad terms, enabling this definition to cover a range of information the public should be entitled to access. While the directive on determining state secrets provides welcome guidance, it is still based on the Secrets Act, meaning it does little to address this fundamental flaw in the legislation.

Moreover, the directives fail to expand the right to access information beyond the limited remits of the Act. Currently, the Act applies to Iranian Citizens only, leaving the rights of non-citizens such as refugees and asylum seekers from Afghanistan unprotected.

Concerns about the independence of the Information Commission, the oversight body mandated by the Act, also remain, as the Commission is housed within the Ministry of Culture and Islamic Guidance, known for its efforts to limit the right to freedom of expression.

Implementation must be improved

Moreover, while an increasing number of institutions have been joining the online portal (the standard interface for requestors to demand information) and proactively publishing information in a welcome step towards proper implementation, institutions falling under the control of the Judiciary and the Supreme Leader have been notably absent.

The lack of compliance by the Judiciary, an institution whose conduct already indicates a belief that it is above the law, is particularly concerning given the escalating human rights crisis in the country.

“Reports of systematic and gross violations of human rights, including widespread and systematic unfair trials that rely on torture-tainted confessions and the use of the death penalty to instill fear, surface every day. The people in Iran have been demanding justice and transparency. Yet, the state’s own data clearly demonstrates that the Judiciary is showing almost zero transparency and accountability,” said Saloua Ghazouani.

As International Right to Know Day is celebrated, the authorities must ensure that they prioritise amending and fully implementing the Act, so that people in Iran are able to exercise their right to access information, and all institutions covered by the Act are held accountable through it.

[2] A translation of the Act and its bylaws can be found in our summary.