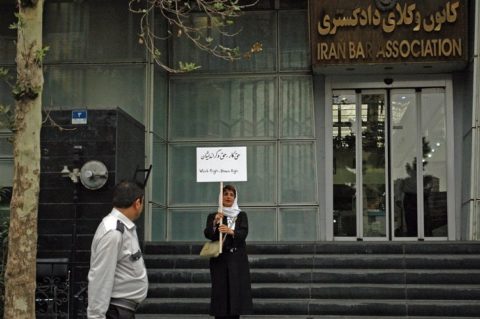 ARTICLE 19 strongly condemns the sentencing of Nasrin Sotoudeh, a renowned human rights defender in Iran who has fought tirelessly for more than a decade against rights violations by the government. A Facebook statement by her husband on 11 March 2019 confirmed that she has been sentenced to 38 years in prison and 148 lashes for her legal defense of women involved in protests against the compulsory hijab (Islamic veil for women). The sentence is one of the harshest punishments the country has ever doled out to a human rights defender and lawyer, and represents a new low for the country’s repressive judiciary.

On 11 March 2019, only a few days after France invited Nasrin Sotoudeh to be part of the G7 gender equality forum, she was informed by the office for the implementation of sentences in Tehran’s Evin prison, where she is currently jailed, that she had been convicted on seven charges and sentenced to 38 years in prison and 148 lashes.

Sotoudeh was arrested on 13 June 2018 for her work as a lawyer defending women facing charges for their involvement in peaceful protests against the compulsory hijab. It is unclear why the judiciary would take this harsh route with such an internationally well-known human rights lawyer, whose only ‘crime’ is defending women’s right to protest.

The charges in response to her work as a human rights lawyer, include “inciting corruption and prostitution”, “openly committing a sinful act by… appearing in public without a hijab” and “publishing falsehoods with the intent to disturb public opinion,” the majority of which fall under Article 287 of Iran Islamic Penal Code, commonly mobilised to repress human rights defenders and repress freedom of expression.

“It is a sad day for human rights to see Nasrin’s legitimate legal work met with such an absurd and repressive sentence,” said ARTICLE19’s Executive Director Thomas Hughes. “Sotoudeh has been at the forefront of defending human rights in Iran, standing in opposition to inhumane punishments of execution, as well as standing firm to oppose discriminatory laws and the compulsory hijab. We demand Iran release this brave defender of human rights and allow her to continue her legitimate legal work.”

The sentencing came on the first day of the new judiciary chiefs tenure, the hardline cleric Embrahim Raisi, appointed by Ayatollah Khamenei. During her sentencing, Article 134 of Iran’s Penal Code was applied, which allows judges to use their discretion to impose a higher sentence than the maximum statutory requirement when a defendant faces more than three charges. However, the resulting sentence is far above what would usually be handed down in such cases. Iran’s Islamic Students News Agency, has only reported on a sentence of seven years.

Sotoudeh has a long history of continuing her work despite state retribution. Her first arrest came in August 2010 on charges of “spreading propaganda and conspiring to harm state security” because of her work defending a Dutch-Iranian dual citizen charged with security offenses. She was then sentenced to 11 years and banned from practicing law or leaving the country for 20 years, which was later halved to six years in prison.

Nasrin’s work as a human rights defender has received international recognition including the PEN/Barbara Goldsmith Freedom to Write (2011), Southern Illinois University School of Law Rule of Law Citation (2011) and Sakharov Prize (2012). On 21 September 2018, she was also awarded the annual tribute for a lawyer, the 23rd Ludovic-Trarieux International Human Rights Prize initially bestowed on Nelson Mandela in 1986 when in jail.

“Nasrin has not committed any crime, and this latest punishment is an attempt to make an example of a respected international lawyer. Iran’s escalating crackdown on human rights defenders must end,” added Hughes.