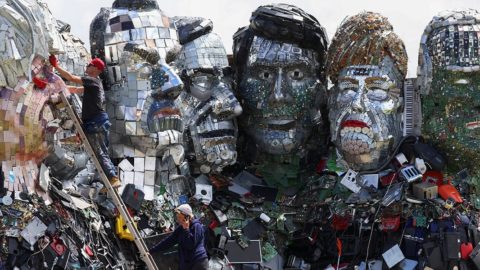 As world leaders gather at a small coastal town in Cornwall, UK for the G7 summit in June 2021, ARTICLE 19 calls on member countries to demonstrate their policy goals by protecting media freedom and the right to protest.

“We know that a free and independent media is crucial to any democracy,” said Quinn McKew, Executive Director for ARTICLE 19.

“To further their policy commitments, especially the shared values based on fundamental  freedoms, it is time for member countries to renew their relationship with the media, and protect rights to expression.

“The protection of journalists is a cornerstone of media freedom, yet we have seen the relationship between governments and media decline on every continent in recent years. And we have seen deeply concerning trends in law and policy on the right to protest. We need real leadership from the G7 to help reverse this decline.

“The fight against disinformation, triggered in particular by the information disseminated during the COVID-19 crisis, must also be stepped up.

“As the world continues to respond to the COVID-19 pandemic, people need to know they can rely on a strong, independent media to keep them informed.”

ARTICLE 19 calls on the UK government to use its role as summit chair to lead initiatives for recovery in line with the Sustainable Development Goals (SDGs). We join the voices of civil society organisations calling for a boost to financial support for countries most vulnerable to climate change, and to protect racial justice, gender equality and human rights defenders.

Yet some G7 governments have caused alarm with their response to human rights, and in particular those associated with protest and the media.

In 2021, the UK introduced the Police, Crime, Sentencing and Courts Bill in response to protest movements such as Extinction Rebellion and Black Lives Matter, which saw disruption to daily life in capitsls and towns, and the removal and destruction of public monuments linked to individuals who profited from the slave trade.

If passed, the bill, which is at the Committee stage in the British House of Commons, will place damaging restrictions on people taking to the streets to voice their dissent. Campaigners are particularly concerned that certain  provisions — such as those that deal with noise levels, and temporary restrictions to help manage the pandemic — will be made permanent by the current government.

Other G7 governments have also caused alarm with their response to protest rights.  Earlier this year, French citizens, joined by the gilets jaunes, demonstrated  in large numbers against a security bill that sought to ban the filming of police operations.

In the wake of the attack on the US Capitol in January 2021 many US states took steps to stifle protest, as well as to restrict people’s voting rights.

Yet it was the aftermath of the murder of George Floyd in May 2020 and the impact of the Black Lives Matter protest and movement that exposed not only the systematic racism and discrimination within US law enforcement, but also the profound divisions within US society that became so obvious during the Trump presidency.

“Protecting protest is about championing our common values”, said McKew.  “The G7 leaders must be emphatic and consistent in doing so.”