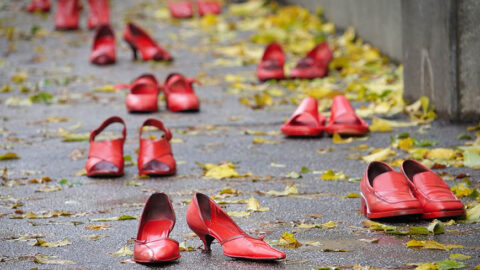 This year marks the thirtieth anniversary of the Global 16 Days Campaign, which was launched by the Center for Women’s Global Leadershipto call for the elimination of gender-based violence.

This year, the campaign is focusing on femicide. The Covid-19 pandemic has considerably accelerated inequalities and violence against women, particularly those targeted as a result of their sexual orientation, gender identity, or ethnic and religious background.

Globally, almost 1 in 3 womenhave been subjected to intimate partner violence, non-partner sexual violence or both, at least once in their life. – and this figure does not include sexual harassment. Fewer than 40% of the womenwho experience violence seek support. The rates of depression, anxiety disorders, unplanned pregnancies, sexually transmitted infections, and HIV are particularly high in women who have experienced such violence.

This phenomenon is especially concerning for the most marginalised women :

“There has been some progress on the rights of marginalised groups, but there’s still a long way to go,” says ARTICLE 19 Executive Director Quinn McKew. “We need continuous efforts to place the most marginalized individuals, including all women, at the centre of social and political decision-making processes. We need more detailed research, and the support of governments, international institutions as well as the media and social media platforms to bring about lasting change.”

Governments need to continue legislating on gender-based violence, setting up the appropriate structures to support, convict and prevent such cases, including in the online world. For this to happen, we need to tackle the root causes: entrenched misogyny and patriarchy.

Today, governments are facing the rising influence of anti-rights groups, including faith-based organizations, who have been increasingly targeting human rights groups working on gender and sexuality, including LGBTQI+ groups. This has been happening in the majority of local, regional and international contexts, with these groups working together transnationally and sharing resources. They have been specifically targeting the international human rights system, undermining the very foundations of the system as a means to protect so-called national interests and values: sovereignty, the family, tradition and culture. There needs to be a considerable wake-up call amongst policy-makers and concerted efforts to provide a discursive shift, as well as further implementation of existing and new laws to protect all citizens.

Furthermore, in recent years, online harassment and abuse has become more widespread. Women in all their diversity are at particular risk of online violence.This is deeply problematic as so many seek to rely upon the Internet to express who they are, meet as a community, develop connections, and carry out their work, sometimes in contexts where the online world can be their only platform for visibility and action. This harassment can take many different shapes and forms including doxing, the use of deepfakes in pornographic manner, and even the harassment of their families and communities – yet social media platforms are still lagging behind in terms of implementing sustainable and effective technical and non-technical solutions.

ARTICLE 19 will continue to advocate for technology companies to step up and think creatively about how to counter misogyny and all forms of hate speech to be one step ahead of the curve rather than many steps behind, and to make a concerted effort to stand side-by-side with all women in dismantling patriarchy online, and offline.

Follow all activities of ARTICLE 19 during the 16 days of activism, including all our regional work, via our social media platforms.