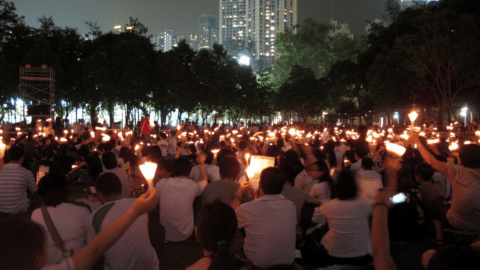 In an open letter to Hong Kong Secretary for Justice Teresa Cheng, ARTICLE 19 alongside 71 other international non-governmental organisations and individuals, calls for the charges against Chow Hang-tung (鄒幸彤) to be immediately dropped and for her to be unconditionally released.

Ms. Chow is a barrister and vice president of the civil society group Hong Kong Alliance, which organises the annual Victoria Park vigil to commemorate the 1989 Tiananmen Massacre. Police arrested Chow on 4 June 2021, released her on bail on 5 June, but detained her again on 30 June.

The charge against Chow is based on alleged violations of Hong Kong’s Public Order Ordinance, which requires organisers to notify police of demonstrations in advance, and requires them to get a ‘notice of no objection’ from the police before proceeding. The UN Human Rights Committee has criticised the law, saying that ‘it may facilitate excessive restriction’ on basic rights. Human rights organisations have repeatedly urged the Hong Kong government to amend the law because it is incompatible with international standards on freedom of assembly.

The police banned the 2021 vigil on public health grounds, although Hong Kong has kept COVID-19 under control and had few infections at the time. Following the announcement of the ban, Chow wrote an opinion article and a Facebook post urging people to mark the occasion by lighting candles and that she would do so in a public space. There is no basis for interpreting her message as ‘inciting’ people to publicly gather or violate social distancing rules in effect at the time.