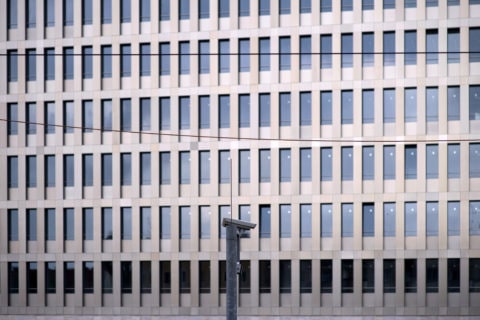 A security CCTV camera outside new headquarters of the Bundesnachrichtendienst BND, the German intelligence service.

ARTICLE 19 calls upon the German ruling coalition to withdraw a proposed new law that would empower the German Foreign Intelligence Agency (BND – Bundesnachrichtendienst) to place foreign citizens under surveillance without a court order. The final parliamentary debate is due to take place on 26 September.

“We are very concerned the Bundestag could be about to pass legislation that would undermine guarantees of freedom of expression and privacy for non-German citizens” said Katie Morris, Head of Europe and Central Asia at ARTICLE 19.

Under the new law, the BND would be allowed to place foreign citizens under surveillance without a court order, if deemed to be in the interest of national security or foreign policy. Certain limitations would apply to EU nationals. It would also allow them to share any information with foreign intelligence agencies. Exemptions that had previously protected journalists in the so-called G10 law (German legislation that currently regulates broad strategic surveillance activities) have been excluded. The proposed bill passed its first reading in the German parliament in early July.

“The right to privacy is an intrinsic part of freedom of expression. It allows individuals to express themselves without fear of reprisal. It enables whistle-blowers to come forward, and is particularly important for journalists or others writing in the public interest, who must be able to guarantee the anonymity of their sources,” said Katie Morris.

When it was revealed last year that Der Spiegel had been targeted by the US National Security Agency it caused international outrage. This bill would empower the German security services to similarly target non-German journalists. The ability of journalists to work freely, including to guarantee the confidentiality of their sources is essential for them to undertake investigatory journalism in the public interest. It is crucial that sources are able to remain unidentified by the authorities and the public, as their disclosures and testimony might have repercussions for them. Public access to critical information often relies on these sources, and their willingness to share information is regularly conditional on confidentiality.

Similarly, non-Germans whose work depends on privileged communication could be targeted. The could include human rights activists and other civil society organisations, undermining their ability to work with partners who may be unwilling to speak without the guarantee of confidentiality, and also other professionals such as lawyers, doctors, ministers of religion, and parliamentarians.

Germany’s current law already has a number of deficiencies in guaranteeing privacy and freedom of expression. The so-called G10 law only grants protection to professional journalists. We are concerned that it may not apply to bloggers or civil society organisations, who increasingly play an important role in today’s media environment.

“Instead of asserting privacy as a solely German right, the government should lead by example and strengthen the protections for everyone, regardless of nationality”, said Morris.

“ARTICLE 19 is concerned that this law will make it open-season on the privacy and free expression of foreigners. For Germany, that would be a retrograde step. While recent attacks in Europe, including Germany, have left many feeling insecure it is more important than ever that governments re-affirm their commitment to fundamental human rights.”

ARTICLE 19 calls on the government to withdraw the bill. Any new bill should ensure that surveillance be targeted, require a court order, and explicitly guarantee journalistic privileges. Any such bill should define ‘journalist’ broadly to cover those communicating in the public interest, including bloggers and human rights defenders. It should also protect confidential communications with doctors and ministers of religion and the privileged communications of MPs and lawyers.