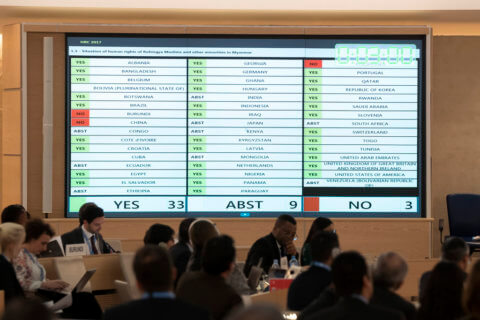 The 38th session of the UN Human Rights Council (HRC38), which concluded in July 2018, saw the adoption of four key thematic resolutions, advancing freedom of expression standards and setting out States’ commitments to ensure their more effective implementation at the national level:

Mapping out States’ political support for these resolutions, as well as States’ opposition to them, provides us with insight on both the geographic distribution and strength of States’ commitments to freedom of expression.

How Resolutions at the HRC work

The HRC has 47 HRC Member States elected for three-year terms, with all other States having observer status. Only the 47 members are permitted to vote on resolutions. Resolutions ordinarily pass by consensus, and there is only a vote if a Member State calls for one.

Within the adoption process, States may also propose adverse amendments to change resolution language against the wishes of the main resolution sponsors. Such amendments are generally intended to weaken the human rights protections contained in the resolution. Adverse amendments are typically voted, unless withdrawn by the States who initially proposed them, before the final text is then considered for adoption by the HRC.

While observer States cannot vote at any point, they may express their political support for resolutions and the commitments they contain, through their co-sponsorship.[1]

Support for freedom of expression became stronger and more global at HRC38, and the opponents of this right, as well as support for the related rights to freedom of assembly and of association, appeared to have become more isolated.

Despite China calling a vote on the civil society space resolution, no States voted against its adoption, including China itself. The resolution was adopted with 35 States voting in favour,[2] with 11 States abstaining.[3]

The data shows a significant increase in support for the civil society space resolution across all regional groups, compared to voting on the resolution two years ago.[4]


Figure 1: Voting on Resolution 38/12 from the 47 members of the HRC, minus the US. States supporting the resolution are shown in green; States that abstained are shown in orange.

The voting results suggest that the rights to freedom of expression, association and assembly are much more universally accepted at the HRC than its detractors often claim: States from all regions and at varying stages of economic development signalled their support for reversing the global trend of shrinking civic space, with those opposed to addressing this priority human rights issue in a shrinking minority.

Ensuring that support within the Council translates to tangible action in the implementation of these commitments at national level must follow – voting on a resolution is a positive step, but taking action nationally is the true measure of support for human rights initiatives.

States in all UN regions back free expression initiatives

Several States in each of the five UN regions,[5] supported two or more of the four free expression related resolutions.[6]

Support for these resolutions was strongest among the Eastern European Group, Group of Latin American and Caribbean States, and Western European and Other Group, with support much more limited among States from the Africa and Asia groups.

In the case of States that have smaller or less well-resourced delegations to the HRC in Geneva, not cosponsoring can also reflect a lack of capacity to engage in resolution negotiations and the adoptions process.

Adverse amendments resoundingly defeated, but must be more universally opposed

Mapping the votes on each amendment among the 47 voting members of the Council (minus the US) provides a valuable picture of their support for freedom of expression standards.


Figure 3: Voting on five hostile amendments to the key freedom of expression resolutions from the 46 HRC members. We’ve scored states based on their decisions to vote for or against amendments, or to abstain. States received a score ranging from -10 to 10 based on how they voted. Voting against an amendment scored +2, voting for an amendment scored -2, and abstaining scored -1. States shown in dark red voted for all hostile amendments, states shown in dark green voted against all.

At least one State in each regional group showed their strong support for advancing protections for the right to freedom of expression by voting against all five adverse amendments.

Only a minority of States voted for the adoption of all five adverse amendments: Burundi, China, Egypt, Ethiopia, Pakistan, Qatar, Saudi Arabia, the United Arab Emirates, and Venezuela. Their efforts to impede the adoption of progressive resolutions that seek to better protect human rights worldwide, brings into question their suitability as HRC Member States.

The very low scores of democracies like Kenya and Nigeria, is at odds with the countries’ strong constitutional protections for freedom of expression and vibrant civil societies. Similarly, the weak showing by South Africa, Nepal, and Mongolia, is also disappointing.

States shown in yellow and orange took a mixed position on the adverse amendments. While not necessarily voting for hostile amendments, their scores mostly reflect the multiple abstentions they made. While abstentions may be regarded by some States as a neutral position, we scored these negatively to reflect that they actually undermine support for resolutions.

While the internet and human rights resolution faced no hostile amendments, the negotiations were by no means plain-sailing. In the face of strong opposition from a minority of States, the main sponsors made substantial revisions throughout negotiations to head-off the potential for amendments, resulting in a resolution that was weaker than it could otherwise have been. The outcome of votes on other hostile amendments, including on resolutions that were very strong on standards, shows that going to a vote can in many circumstances be a worthwhile risk.

Improving protections at the HRC

The increased support for freedom of expression in all parts of the world underscores the universality of this right at a time when it often feels under increasing threat. Nevertheless, this support is unevenly distributed. In particular, for a number of States, the regressive positions they sometimes take at the HRC do not reflect their strong national constitutional protections for freedom of expression, or their histories of strong civic activism and engagement.

HRC Member and Observer States across all regional groups should be unequivocally supporting resolutions on the protection of freedom of expression, and resoundingly rejecting all attempts to weaken them, in order to demonstrate their commitment to ensuring the right to freedom of expression and information is respected, protected and fulfilled for all. Increasing awareness of these resolutions at the national level, to push governments that previously have not supported them to do so, will also be key to ensuring these standards are implemented and impact on the protection of human rights on the ground.

[1] All UN member states have observer status at the HRC, except the US, which exited the Council entirely in July 2018.

[6] Co-sponsorship of a resolution was given a score of +1, up to a maximum of 4 for States that supported all four resolutions. States in grey did not support any of the four freedom of expression related resolutions as cosponsors.