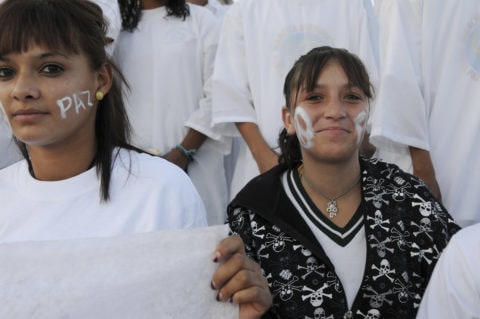 The effort to eliminate violence against women is a constant, every-day, around-the-clock undertaking. However, this International Day for the Elimination of Violence Against Women is particular in that it is occurring in the midst of the COVID-19 pandemic. Alarmingly, there is a concurrent pandemic of a rise of violence against women globally due to COVID-19, which UN Women has termed the “shadow pandemic.”

Now more than ever, it is critical for governments to prioritize gender equality in their responses to COVID-19 and in their promotion and realization of fundamental human rights, particularly the right to freedom of expression and information (FoE). FoE is an enabling right and is essential in ending inequality and other forms of gender-based discrimination. Technology companies, social media companies especially, also have a responsibility to ensure that women are able to access and utilize their services and platforms safely and securely. This is of paramount importance given that much of political and social interaction, including access to support services, has gone online due to COVID-19.

First, governments must recognize that FoE and women’s rights are mutually reinforcing rights – that the meaningful promotion of one supports the other. Historic and current tensions exist where the right to FoE has been used by people to legitimize misogynistic and discriminatory speech. If our collective attention remains focused only on safeguarding FoE for those who already benefit from existing power structures, then our focus is off and we are at a gross disservice to the millions of women who bear the brunt of gender inequality, discrimination, poverty and violence. Governments – and free speech advocates – must give proactive and considered attention to women’s ability to exercise their right to FoE, which if fully enabled will empower women and benefit society as a whole.

Secondly, major social media platforms like Facebook, Twitter and YouTube have become essential spaces for women to participate in civic space, particularly for women journalists, activists, human rights defenders and other women with public-facing professions. While these very channels can provide women with access to audiences and information that would otherwise be out-of-reach, they have also become spaces for gender-based online harassment and abuse to proliferate. Left unchecked, these spaces become weighed in favour of men, and in order to protect themselves, their jobs and/or their families, women journalists often are left with no choice than to resort to self-censorship, or more drastically, remove themselves from these critical platforms. As power-holders with influence over the online environment, and as COVID-19 places extra emphasis on the importance of the virtual world for health, work, family, and accessing essential services, tech companies cannot leave women behind. Technology companies must step up to think creatively on how to counter misogyny, to be one step ahead of the curve rather than many steps behind, and to take concerted effort to stand side-by-side with women in dismantling patriarchy online, and offline.

Thirdly, when attacks against women occur, including serious forms of online harassment and abuse which meet a level of severity to create criminal liability, States must take action to quickly and effectively investigate these incidences. Many reports show widespread impunity for violence against women, and attacks against women journalists are often left uninvestigated, feeding into a global and systemic “chilling effect” on women’s voices. In more recent years, online gender-based harassment and abuse has been on the rise, and the complexity of the Internet also complicates the ability to investigate online attacks. This circumstance does not excuse States, but rather it stresses the need for States to have greater ingenuity, commitment and investment in investigating online attacks against women, especially when attacks reach the level of criminality.

The lines of discrimination, sexism, racism, poverty and other forms of oppression were long drawn before COVID-19 hit, however the pandemic has exacerbated these fissures and across different communities women are bearing the brunt, often in violent ways, and often in silence. While COVID-19 has pushed much of the global population into physical isolation, enabling violence against women to spike across the world, the isolation must not be virtual. Access to a safe and secure Internet is key in amplifying women’s voices, highlighting their lived experiences and needs, and in combating violence against women world-wide. States and technology companies must support this by enhancing women’s ability to exercise FoE, which in turn will unleash more feminist activism, greater news reportage from a more diverse range of viewpoints, and increase counterspeech to challenge and chip away at the foundations of misogyny, gender-based discrimination, and oppression.