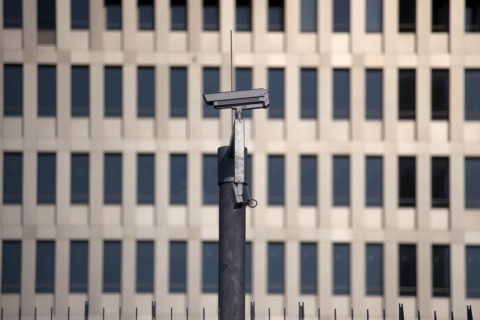 A surveillance camera in front of the newly built headquarters of the Bundesnachrichtendienst BND, the German intelligence service agency.

ARTICLE 19, along with numerous civil rights groups, has condemned France’s new draft law on surveillance measures for international electronic communications in a joint-statement (below).

As a crucial part of the global Internet traffic goes through French submarine cables, this law would put  France in the list of countries with sweeping surveillance capabilities.

The measures proprosed are disproportionate, and the Bill fails to defend and protect the right to privacy of individuals in France, and worldwide.

With this new bill, parliament is about to approve new disproportionate surveillance measures to monitor international communications. Based on the principle of massive collections of data, the bill seeks to legitimise the civil and human rights abuses revealed by Edward Snowden about the practice of intelligence agencies such as the ones in the US and the UK. As a crucial part of the global Internet traffic goes through French submarine cables, this law would put  France in the list of countries with sweeping surveillance capabilities.

This bill follows from the Surveillance Law passed in June, which allows the French government, among other measures, to monitor people’s phone calls and emails without judicial approval; and to install black boxes on internet service providers’ infrastructure to collect metadata on millions of innocent individuals.

Earlier this year, the French Constitutional Council struck down one of the provisions of the Surveillance bill, and the new proposal seeks to re-authorise the international surveillance programme impacted. The draft law will be voted on 1 October by the French National Assembly.

In particular, we are deeply concerned that

We, the undersigned organisations urge the French Parliament to reject this international surveillance bill and protect the rights of individuals all around the world. The principle of universality of rights is a fundamental principle, especially the European Union. We call on you to strengthen civil liberties and human rights safeguards
for all and reject this proposal.