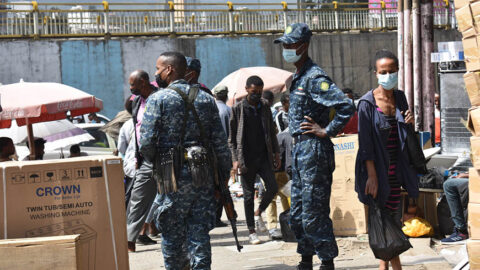 ARTICLE19 is concerned by threats to freedom of expression and access to information arising from the ongoing armed conflict in Ethiopia between the Tigray People’s Liberation Front (TPLF) and the Ethiopian government. We are particularly concerned by the state of emergency declared on November 4 2021, which grants the authorities unchecked powers to detain anyone suspected of having links with “terrorist” groups without a court warrant and judicial oversight.

Ethiopia is currently witnessing an ongoing armed conflict between the federal government and the Tigray People’s Liberation Front (TPLF) and allied groups. On 4 November 2021, the Ethiopian parliament approved the state of emergency proclamation forwarded by the Council of Ministers on 2 November. Ethiopia’s cabinet had declared a nationwide state of emergency justifying it on the basis of the ongoing conflict and the need to protect civilians from atrocities being committed by the “terrorist” TPLF group in several parts of the country.

On 3 November 2021, the Office of the United Nations High Commissioner for Human Rights and the Ethiopian Human Rights Commission released a joint report into abuses committed in the first nine months of the conflict in Ethiopia’s northern Tigray region between 3 November 2020 and 28 June 2021. It found evidence of serious abuses, including unlawful killings and extra-judicial executions, torture, sexual and gender-based violence, arbitrary detentions, violations against refugees, and forced displacement of civilians.

The report also details the impact of the conflict on a range of other human rights, including restrictions on freedom of movement as well as constraints on freedom of expression, media freedom and access to information, with the internet and other means of communication largely cut off. Specifically, the report found that the internet shutdown prevented journalists from effectively carrying out their reporting and stopped civilians from communicating with their families about their safety or obtaining critical information on access to food and medical supplies.

In the days following the declaration of a state of emergency, Ethiopia witnessed a number of restrictions to the right to freedom of expression, media freedom and access to information.

According to reports, since the declaration of the state of emergency on November 2, at least 1000 people, mostly ethnic Tigrayans, have been detained in cities across Ethiopia. The UN reports that many of those detained have not been informed of the reasons for their arrest or charged before a court of law. Likewise the Ethiopian Human Rights Commission has expressed concern that arrests may be ethnically motivated and asked law enforcement authorities to ensure arrests are made on the basis of reasonable suspicion.

Furthermore, journalists have been arrested for reporting on the ongoing conflict and attacks on media actors have also been reported. The Ethiopian Media Authority sent warning letters to several media houses in Ethiopia including Associated Press (AP), CNN, BBC and Reuters for reporting on the ongoing conflict. This has made coverage of events difficult and prevented citizens from documenting and sharing human rights violations.

On 8 November 2021, Ethiopia shut down social media and messaging services including Facebook, Instagram, Facebook Messenger and Whatsapp. These services were restored four days later. While the cause of the shutdown has not been officially communicated, media reports state the aim was to prevent cheating in exams as a pro-opposition activist had allegedly leaked the exam questions online. Nevertheless, arbitrary internet restrictions restrict the free flow of information and ability of citizens to express themselves during such a critical time.

“The state of emergency has increased the risk of arbitrary arrest and detention of opposition group members. Intimidation of the media has also resulted in self censorship by media and civic actors, among others. These moves appear to be an attempt by the Ethiopian government to gag information flow during the ongoing conflict. The government must immediately take urgent steps to ensure that the right to freedom of expression for all is fully protected in line with international standards,” said Mugambi Kiai, Regional Director ARTICLE 19 Eastern Africa.

Under International human rights standards, any state of emergency must comply with strict limitations. It must have a clear legal basis, be for a legitimate aim, necessary and proportionate. It must not be arbitrarily or discriminatorily applied, must be time limited and subject to regular review. States are also bound by the International Covenant on Civil and Political Rights to follow a notification procedure when declaring a state of emergency that limits rights protections.

The Ethiopian government has signed several international human rights treaties which guarantee online and offline freedom of expression and access to information. ARTICLE 19 therefore calls on the government of Ethiopia to ensure that all measures that are used during the state of emergency are based on full protection and respect for human rights and in line with international standards. We also call upon it to end the prosecution of those exercising their right to freedom of expression.