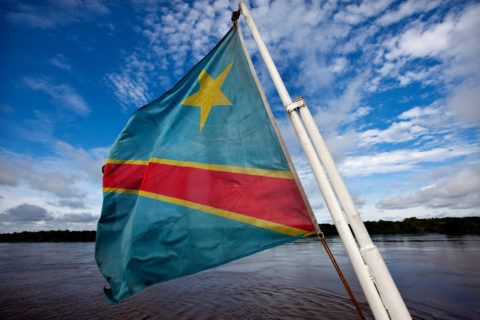 The flag of the Democratic Republic of Congo flies from the stern of a boat on the River Congo. Credit: Kris Pannecoucke

Article 19 is concerned about the crackdown on freedom of expression in the Democratic Republic of Congo in recent months, with at least 40 cases of journalists arrested during the year, activists and citizens intimidated, beaten, arrested and or prosecuted.

“Arresting activists and journalists simply for criticizing the government is unacceptable. The government must release everyone detained solely for expressing their opinion immediately. We urge the government to respect and uphold the right to freedom of expression, including criticism against its officials,” said Mugambi Kiai, Article 19 Eastern Africa regional director.

The arrest of Congolese singer Tshala Muana on 17 November 2020 was the latest incident. The authorities subsequently banned her song titled ‘Ingratitude’, amid speculation over the ‘deeper meaning/interpretation’ of the song released recently which was seen as critical of the president and government of DR Congo. Despite her release a day later, Article 19 considers her arrest and the ban an effort to silence criticism, which puts human rights at risk in the country.

Although the authorities have not publicly clarified the reason for her arrest, activists consider it related to a controversial song. Relatives of the popular musician said agents from the National Intelligence Agency (ANR) took her away in Kinshasa, saying she was wanted for questioning. According to her companion and producer, the secret service was unhappy with her latest song “Ingratitude”, which they perceived as critical of the government of DR Congo and directly aimed at President Felix Tshisekedi.

Following the election of Felix Tshisekedi as president in 2019, the protection and promotion of human rights in the country seemed to have taken a turn for the better. He has taken progressive steps including the release of political prisoners detained under his predecessor and extended an invitation to political exiles to return home to move the country forward.

However, there has been a downturn in the protection and promotion of human rights in the country, especially freedom of expression. The authorities have used the global COVID-19 pandemic as a pretext to crack down on critics, human rights defenders, journalists and opposition party members in the country. In addition to arrests anddetention, authorities have also used threats, including serious death threats often preceding the act.

Since March 2020, when the government announced a state of emergency in the context of COVID-19, protests and large gatherings have been banned. Security forces have used excessive force and cracked down on protests.

In September 2020, Denis Mukwege, a Nobel peace laureate, faced death threats for condemning a wave of killings in eastern DRC and calling for perpetrators to be brought to justice.

“Under international law, public officials must tolerate a larger degree of criticism than ordinary citizens. The crackdown on individuals for criticizing the government, and raising issues of public interest, is a violation of the right to free expression in a democratic society,” said Mugambi Kiai.

Article 19 Eastern Africa calls on authorities in the Democratic Republic of Congo to drop all charges against journalists and put an end to criminal investigations and prosecutions against individuals solely for expressing their views, including views which may be critical of government officials.