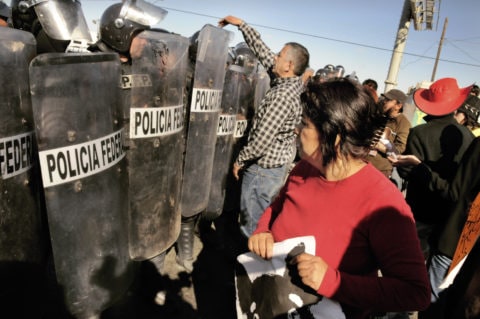 Demonstrators clash with security forces as they protest the visit of Mexican President Calderon to Cuidad Juarez. Ciudad Juarez has become the world's most dangerous city. More than 2,600 people were killed in 2009. Since President Calderon declared war on the drugs cartels in 2006 and deployed thousands of troops, the violence has only increased.

In light of the OECD meeting taking place in Cancún, the increasingly precarious situation for human rights in the country and recent deaths in the course of teacher’s protests, ARTICLE 19 has released a comment and joins other civil society to call for action from the Mexican government.

“As the diplomatic community gathers in Mexico to focus on the global economy, it’s paramount that the Mexican government is reminded of its obligations to protect and promote the rights of its citizens and further to ensure their safety when exercising those rights. Violent responses to protest do not sit in a vaccuum and impact on everyone in society, including the prosperity of that society. Now more than ever, the Mexican government needs to step up to the plate and take responsibility for the actions of state agents, and to make a lasting committment to uphold its international human rights obligations,” said Thomas Hughes, Executive Director of ARTICLE 19.

The joint statement is below.

The Ministerial meeting on digital economy OECD currently taking place in Cancún, Mexico is a forum on public policies that shape the global economy. The aims are to promote innovation, growth and social prosperity. However, this important international event occurs in a critical social and political context for the Mexican government. The incidents in Oaxaca must not be overlooked while Mexico accepts serious international commitments in favor of openness, democracy, and participation.

Last Sunday, 19 June, Mexican police forces opened fire on teachers and civil society organizations who were protesting against educational reforms in the city of Nochixtlán, Oaxaca. This incident occurs in the context of the serious human rights crisis that Mexico has faced in recent years, as recognized by various international organizations such as the Inter-American Commission on Human Rights and the Special Rapporteur on torture of the United Nations. The violence has left eight people dead (seven killed during the protests, and a journalist killed while carrying out his journalistic activities), seven people missing, 21 people arrested, and 108 people injured.

Moreover, it was reported that telephone lines and internet services were shut down, preventing journalistic activities as well as blocking the means of communication for protesters and residents. As members of Mexican and international civil society participating at the OECD Ministerial meeting through CSISAC, we believe that the events are unacceptable and incompatible with the values ​​that this event aims to achieve. Democracy cannot exist in a context of state violence that disregards the right to protest.

We make an open call to participants, national and international press and delegates attending the Ministerial meeting, to pressure the Mexican government to publicly assume responsibility for the incidents in Oaxaca and fulfill its international commitments regarding human rights in order to be considered an innovative and prosperous country. As suggested by the World Bank, the respect for human rights increases economic growth and in particular, the distribution of this growth throughout society.

Finally, we call on the OECD to more rigorously assess Member States’ compliance with human rights to ensure rights are an inherent part of the future global economy.

Signed by the following organizations and individuals