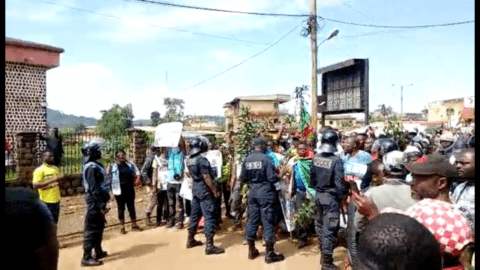 Protesters in Cameroon on 22 September 2020

ARTICLE 19 urges the Cameroonian authorities to investigate the excessive use of force during peaceful protests in Yaounde and other cities in Cameroon on 22 September 2020. They must immediately release all protesters who were arrested solely for expressing their opinion and investigate attacks against journalists ill-treated and arrested for collecting information on the protest .

“It is unacceptable that the security forces used lethal force against peaceful protesters, arrested and humiliated people only because they were exercising their right to protest. The authorities must investigate these human rights violations and explain why one of the protesters died and others were injured and illtreated. The authorities must ensure that those suspected to be responsible are brought to justice”, said Fatou Jagne Senghore, Regional Director of ARTICLE 19 West Africa.

“One person was reportedly killed, at least ten wounded and 60 arrested including five media professionals. Some of them were victims of ill-treatments”

The Mouvement pour la Renaissance du Cameroun (MRC) called for a series of peaceful protests across the country to demand the departure of the President of the Republic. On 21 September 2020, Communication Minister and Government spokesman Rene Emmanuel Sadi announced during a press conference the ban on the demonstration, describing it as calls for popular uprising and overthrow of institutions by leaders of a political party, but this decision undermines the right to free expression and peaceful protest.

On 22 September, activists responding to the call of the MRC, stormed the streets in different cities of Cameroon to peacefully protest. But the security forces used tear gas and a water cannon to disperse the protesters. According to media reports, one person was killed, at least ten were wounded and 60 people arrested, including five media professionals. Some of the protesters were ill-treated, and security forces reportedly ordered those arrested to sit on the ground and forced them to sing a chant to glorify the President of Republic.

No one should lose their life, or fear torture or ill-treatment because of exercising their right to protest. The police should have facilitated this peaceful protest, but instead, they used force to disperse the protesters. ARTICLE 19 has reviewed three videos of the protests and all protesters appeared to be peaceful. When attending a protest, the police should be guided by the presumption of peacefulness, rather than assuming there will be violence and resort to using force.

“Five media professionals were arrested. Although Rodrigue Ngassi identified himself to Security forces as Media cameraman, they arrested him and twisted his arm.”

ARTICLE 19 urges the authorities to ensure the protection and safety of journalists, to tolerate media reports on dissident opinions, especially during protests and to unconditionally release all those arrested only for exercising their rights to freedom of expression and association.

Polycarpe Essomba, a Radio France International reporter was beaten, while he was covering the demonstration. The police hit him with a truncheon and took him to a police station, released him after two hours. Lindovi Ndjio, Journalist of “Nouvelle Expression”, Tah Jarvis and Tebong Christian respectively Journalist and Cameraman of “ My Media prime”were finally released on the evening of 23 September 2020 in the second day of their arrest.

“The arrest of the journalists, who were just doing their work, is a violation of media freedom. The role of the media is to report and inform the public about anything relevant to them. The authorities shouldn’t intimidate journalists and restrict the right to access to information.”

“Journalism is not a crime. It is not enough to release the arrested journalists. Any charges should be dropped. The Government must shed light on the ill-treatments and the motivation of the arrests of these journalists. Cameroon must end the cycle of impunity for attacks against journalists and brutal repression of protesters“, urged Fatou Jagne Senghore.

It is very risky to work as a journalist in Cameroon, and the protection of the media continues to deteriorate. Following attacks on the press, ARTICLE 19 has interviewed the data journalist Paul Joël Kamtchang, Executive Secretary of ADISI Cameroon, who stated:

“The protection of journalists in the exercise of their profession is deplorable in Cameroon.  The authorities seem to believe they are above the law; they think they can muzzle journalist on duty.”

ARTICLE 19 calls on the African Commission Special Rapporteur on Freedom of Expression and Access to information to urge the government of Cameroon to respect their obligations under the African Charter on Human and Peoples’ Rights and guarantee media freedom.

“We are asking the African Commission Special Rapporteur to monitor the situation and urge the government to investigate these violations and make sure that Cameroon will not continue to prevent, hinder or restrict unduly the right to protest and to attack media.”

The right to protest enables citizens to participate actively in the socio-political life of their country. Cameroon’s 1996 Law on the revision of the Constitution guarantees the freedoms of expression, assembly and association, press freedom and the right to protest. Also, the Constitution prohibits the use of the torture, and other cruel, inhuman and degrading treatment or punishment.

By banning and using excessive force to disperse a peaceful protest, Cameroon has violated its international obligations. For example, Article 19 of the International Covenant on Civil and Political Rights (ICCPR) and Article 9 of African Charter on Human and Peoples’ Rights (African Charter) guarantee that everyone should be able to express their opinions without interference. The  Guidelines on Freedom of Association and Assembly in Africa underline that protest is a right, for which organisers don’t need prior authorisation.

By using excessive force, the authorities failed to ensure the safety of the public and to safeguard the human rights of all persons during the protest as stated in the African Commission Guidelines for the Policing of Assemblies by Law Enforcement Officials in Africa. Moreover, the excessive use of force doesn’t comply with the requirements of the UN Basic Principles on the Use of Force and Firearms and the UN Code of Conduct for Law Enforcement Officials and the Guidelines on Freedom of Association and Assembly in Africa.

At the UN Human Rights Council, during its last UPR review in 2018, Cameroon received recommendations to ensure that any restrictions on freedom of assembly and demonstration should be in line with international obligations. Unfortunately, the country only noted these, and in practice, Cameroon continues to restrict the freedom to protest. For example, in January 2019 when the authorities banned “marches blanches” following the announcement of the Presidential election results which were contested by the MRC. The security forces used excessive force to disperse the protesters with tear gas and bullets and arrested several demonstrators including the prominent opposition leader Maurice Kamto.