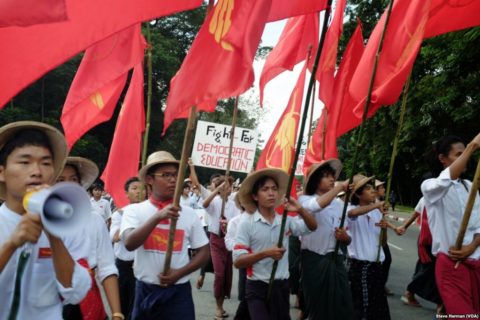 In the year since the Human Rights Council (the Council) adopted Resolution 40/29 on the situation of human rights in Myanmar, the space for political discourse and participation in the country has continued to shrink. Ahead of national elections widely expected to be held in November 2020, Myanmar authorities must facilitate the full political participation of all sectors of society, ensuring that individuals may freely express their opinions, even when they are controversial or critical of the government, military or other vested interests.

In the past year, Myanmar authorities have continued to violate the rights to freedom of expression, information, peaceful assembly and association while cracking down on online and offline speech. Under the guise of tackling ‘hate speech,’ Myanmar authorities have expedited efforts to pass so-called ‘anti-hatred’ legislation, which risks aggravating discrimination against religious and ethnic minority groups. Authorities have yet to take meaningful steps to promote the rights of religious or ethnic minorities within the country and to guarantee their full political participation. The ongoing internet shutdown in Rakhine State – affecting nine townships and now entering its ninth month – is one of the longest ever recorded and an egregious violation of the rights to freedom of expression and information. It disproportionately affects some of Myanmar’s most vulnerable minorities and hinders the reporting of human rights violations in an active conflict zone.

The government has arbitrarily applied restrictive legislation to stifle criticism of political leaders and military authorities. Given the judicial harassment of activists, journalists and others, self-censorship will be a key concern during the election period. Restrictive election laws and directives issued by the Union Election Commission are likely to exacerbate this problem.

Against this backdrop, it is imperative that UN Member States support the adoption of a strong resolution on Myanmar that reflects the severity of the ongoing restrictions on civil and political rights in the country. The Council should call on the government to dismantle restrictions on freedom of expression and take immediate and concrete steps to create as enabling environment for free and fair elections.