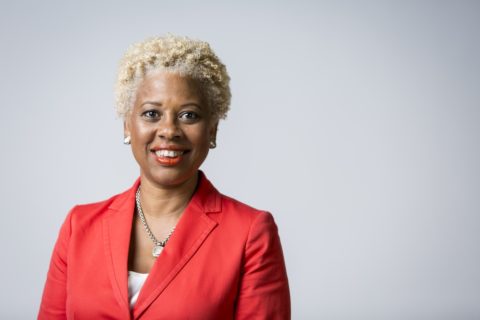 “I was a nervous wreck. I lost 5-6 pounds. I had gastrointestinal disturbance. I was pretty sober. And I like to drink beer. I didn’t resort to that—less than usual. I wanted to be sober in case something happened. I took the safety off my shotgun and waited.”

“That one was big to me. Compared to everything else, that one was big. That one rocked my world. I should see a therapist, I’m still anxious. I’ve never gone to therapy.”
– A reporter that received death threats on Twitter, private communication with TrollBusters.

Despite growing evidence of online violence, as well as physical attacks, against women journalists, many media organizations do not have formal policies or protocols in place to protect their employees. In a global study of women journalists conducted in 2018 by TrollBusters and the International Women’s Media Foundation, 26 percent of women journalists indicated they didn’t know how to report threats and harassment. Online and offline abuse is often underestimated by media management and minimized by colleagues, authorities, law enforcement and others who are best positioned to provide support.

“I got threats, rape threats, I didn’t take them seriously. But then, people began reporting me to Twitter, saying that my account was fake. My account was suspended three times. So I got it verified, and when they (the attackers) failed to suspend my account, started creating fake accounts with my picture, with a handle similar to mine. They started tweeting and attracting my followers and tweeting out.”
–A journalist that received threats regularly on Twitter, private communication with TrollBusters.

This is likewise the case with online attacks, the impact of which is often minimized. Many women try to rationalise online attacks, only taking their concerns to management after attacks have escalated, affected their work or hampered their ability to use social media. However, media management can exacerbate online harms with an inappropriate or lackluster response.

“Management told me not to respond at all to any of the accusations and while that may have proved to be a good strategy, it left me feeling rather defenseless and vulnerable.” –

Journalists, and in particular women journalists, fear retaliation and professional harms from reporting harassment. That fear may explain why only half of women surveyed had reported a recent online incident to media management. Others did not report incidents for fear of retribution or other professional consequences, such as being denied certain stories. More than 50 percent indicated that they didn’t think anything would be done and that is why they did not report to management.

Some women journalists said that they had seen a management response in the past…and it wasn’t a good look. Twenty-nine percent indicated they had heard of negative experiences of others who had reported their threats to management. Many of our respondents reported being taken off of assignments or receiving professional backlash for reporting physical and online attacks to their supervisors or managers. Professional threats to job and security are not just perceived, they are very real for these women.

Media managers must learn better practices for responding to such threats and acts against those they employ – whether in full-time or freelance capacities. Media leaders can develop strategies for monitoring and mitigating the continuing harms to the journalists, and play a role in challenging and ending online and offline abuse. In particular, they should:

Most journalists suggest that management take these online attacks more seriously and help the employee or freelancer work through the attacks with legal, psychological, safety and other supports. Ultimately, they say, they just want their employers to advocate for them and have their back. 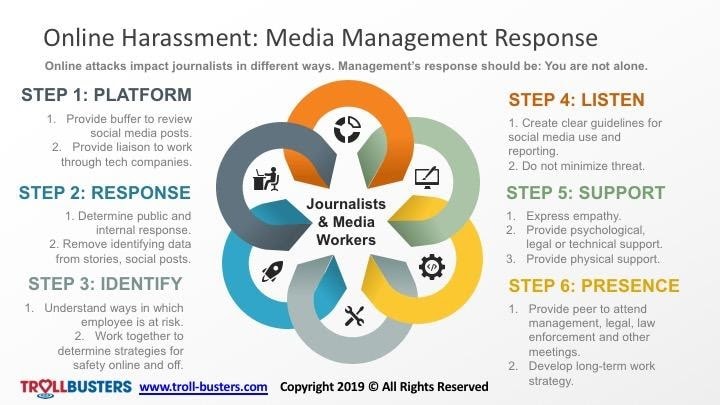