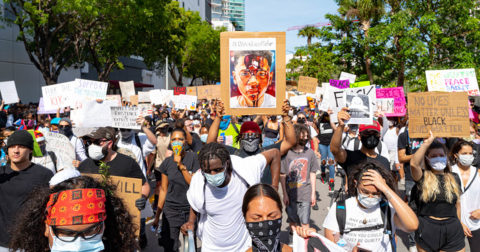 One of the darkest legacies of racism in America is the near-complete removal of black voices from issues of consequence. In the modern day, white Americans have mistaken visibility for voice.  Because black and brown faces were more visible in popular culture, or even in the Presidency, white people thought that the problems of the past were in the past.  But seeing is not hearing.  Only when we stop and listen, when people are heard, do we begin to break down the barriers of inequality and truly work towards a world where Black Lives Matter.

Take a moment to think about the George Floyd video from the perspective of those who bore witness to the murder on the scene.  Person after person could see what was happening, and begged the police in increasingly worried tones to let Mr. Floyd breathe.  They were forced to watch, helpless, as the life drained out of him pinned to the pavement, knowing if they did anything to help the dying man in the face of the police brutality, they would be placing their own lives in very real risk.  They could be the next person lying on the pavement, while others watched life leave their bodies.

In those moments, they were confronted with their powerlessness, knowing what they were watching was wrong, but utterly incapable of stopping it no matter what they said.  They had no voice.  This powerlessness drives the rage and the moment of reckoning in America today.

Brick by brick, American society built institutions on a racist premise that shut off and shut  down avenues for African Americans to speak, engage and contribute.

Voting rights disappeared almost as soon as they were granted, and are continually attacked up to the present day.  Police forces in the South, originally founded as slave patrols, evolved into forces of incarceration and criminalisation of the black community that we still see lived out in front of us with every video documenting police abuse.

The coronavirus has laid bare the race and class divides in the United States in a particularly brutal way.   The impacts are not felt equally.   Despite the death toll continuing to climb, governors and the President alike have declared that saving  “the economy” is more important than saving lives.  Yet proportionally, the lives they are willing to sacrifice are those of minority Americans.

Whites make up 61% of the population, and suffer only 49% of the coronavirus deaths.  Black Americans make up 13% of the population, yet suffer 25% of the deaths.  Institutional and endemic racism has historically provided worse health care for African Americans.  They are more likely to be uninsured and have underlying health conditions that make them vulnerable to the disease.

They are also less likely to be truly heard by health authorities.  The story of Rana Zoe Mungin is instructive.  Rana was a 30 year old black schoolteacher in Brooklyn who died of coronavirus in April.  Over six days she went to the hospital three times with worsening symptoms, only to be turned away twice without testing for coronavirus, including once when they suggested she was having a panic attack.  On the third time, she was admitted and immediately put on a ventilator.  She died a few weeks later.

As an organisation that fights for the rights of freedom of expression, we know that you can’t keep voices silent forever. The protest voices are demanding to be heard, and it is up to all of us who believe in dignity and equality to listen and join in the fight to ensure that these powerful voices are never marginalised again. Our founding fathers believed the right to dissent and protest so essential to our democracy that they enshrined it in the First Amendment; the protestors are the living embodiment of these fundamental ideals.

At a time when far-right extremists spew racist hatred under the banner of free speech, the importance of elevating the countering voices is clear. It is important to remember that the true cause of racists and fascists is not “freedom of speech”, no matter how often they might claim that it is. It is incumbent on all people, but most importantly political leaders and other influential figures, to firmly denounce racism and hatred, and speak out for those who are oppressed and marginalised. It is entirely coherent to do this while defending free speech.

Many have noted the fundamental irony of police using brutal, disproportionate shows of force to try to silence protests that are about those exact police tactics.  The fact that police forces still feel emboldened enough to keep up the repression in the face of international outrage and the omnipresence of smart phones speaks to the deep culture of impunity in America.

The protests are spreading because for the first time in a long time, Americans from across all walks of life are actually listening, and watching, and realising that an immense amount more must be done before racism is eliminated in the country.  As the phrase goes, “Silence is not an option.”

Institutional racism requires institutional change. Legislation like the Justice in Policing Act is a long overdue call to rein in police abuses that perpetuate and exacerbate the racism in the United States and all people must demand their elected officials support these necessary changes.

These same officials must recognise the essential role of journalists in the protection of free speech and the right to information by demanding greater accountability for those who attacked the press during the protests.  The shocking videos demonstrate the contempt the police have for this democratic function, and local, state and federal leaders must condemn these wonton attacks on the media and bring those responsible to justice.

But most importantly, our leaders need to listen, truly listen, to the voices of black Americans.  Hear their anger, and struggles, and most importantly, hear what they want changed so they can no-longer live in fear when they walk in their own communities.  That is the power of voice.