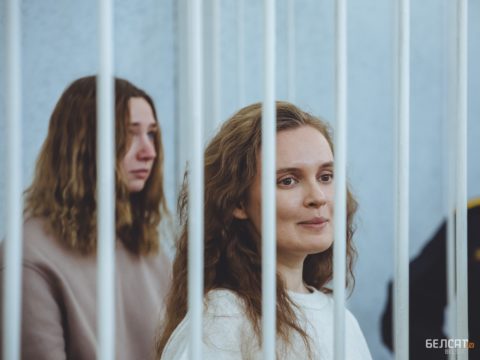 Journalists Daria Chultsova and Katsiaryna Andreeva have been sentenced to two years in a penal colony. Photo: Belsat

ARTICLE 19 condemns the sentencing of journalists Daria Chultsova and Katsiaryna Andreeva to two years in a penal colony for reporting on protests. Both journalists were covering the peaceful protests on 15 November 2020, during which Belarusians demanded a change in government and of the president, and for authorities to be held accountable for the torture and killing of protesters, including Roman Bondarenka. A court in Minsk handed down the sentences on 18 February.

The journalists were sentenced on charges of “organisation of actions that grossly violate public order, and active participation therein” according to part 1, Article 342 of the Criminal Code of the Republic of Belarus.

“Belarus must immediately release Daria Chultsova and Katsiaryna Andreeva,who have been arrested simply for doing their jobs. Since the fraudulent election in August, Belarusian authorities have intensified their crackdown on journalists and civil society. The European Union must do more to hold Belarus to account, bringing harsher sanctions against the country and showing the world that they support Belarusians’ rights to free speech, protest and access to information.”

In the final hearing on 17 February, the journalists’ lawyers presented an expert opinion to the court prepared by ARTICLE 19 that proved  the journalists are being prosecuted simply for carrying out their jobs – gathering and sharing important information about protests and ensuring accountability of public bodies for their actions.

ARTICLE 19 calls for the immediate release of both journalists and for Belarus to cease its politically motivated campaign to criminalise protesters, journalists and human rights defenders. The EU and international community must do much more – including through advanced targeted sanctions and accountability mechanisms – to send a clear message to the Belarusian government that these violations will not be tolerated.