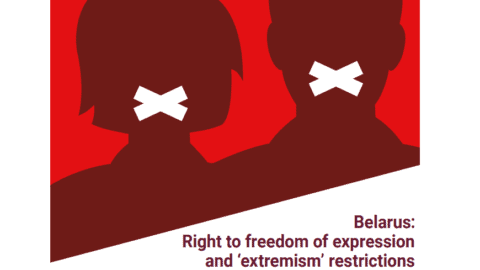 In this report, ARTICLE 19 and Human Constanta examine the interpretation of various Belarusian legislation – in particular on ‘extremism’ and ‘hate speech’ – that is in contravention with the country’s obligations under international human rights law. The report finds that the legislation fails to comply with international freedom of expression standards going beyond the boundaries established by Articles 19 and 20 of the ICCPR.

The report finds that the Belarusian legislation uses vague and undefined terms to determine prohibited expression. The legislation includes:

– Legislation aimed at tackling ‘extremism’; and
– Prohibitions on ‘hate speech’ and incitement to hatred and violence;

This report, without endorsing the conflated understanding of the concepts of ‘extremism’ and ‘hate speech’ in Belarus, analyses the relevant legislation to assess its compliance with international human rights law. It also examines the problematic jurisprudential practices, such as the over-reliance on expert assessments and lack of balance between the restrictions and freedom of expression, to further show the negative impact of this legislation. These practices do not conform with the jurisprudence of the European Court of Human Rights (the European Court) and the practices of Council of Europe countries.

ARTICLE 19 also highlights in the report that the legislation is often applied in an overly broad manner that lends itself to misuse and abuse, thus becoming an instrument of state control and censorship.

ARTICLE 19 and Human Constanta urge the government to bring the relevant legislation and practices in compliance with international human rights standards, with an emphasis on the State’s international freedom of expression obligations. We believe that this compliance with achieve the intended aim of the legislation: to provide protection against national security threats and counter incitement to violence and hatred.

– All legal restrictions on ‘hate speech’ should be compliant with the requirements of legality (i.e. they must be sufficiently clear and precise), necessity (i.e. they must be necessary to achieve one of the legitimate aims of limiting freedom of expression under international law, such as protecting the rights of others), and proportionality (i.e. a particular restriction can be imposed only if a less restrictive alternative is not sufficient). All legal restrictions on ‘hate speech’ should be formulated with reference
to the six-factor test set out in the Rabat Plan of Action;

– Article 130 of the Criminal Code should be revised to make it clear that this provision applies only to speech that amounts to incitement to discrimination, hostility or violence — which in turn requires the proof of intent to cause discrimination, hostility or violence. While the list of protected characters may be legitimately extended (e.g. to include gender, disability, and sexual orientation), “other social affiliation” should be removed on account of its being too broad and unpredictable in its application;

– ‘Hate speech’ criminalised under Article 130 of the Criminal Code should be moved from the category of crimes against humanity to crimes against the individual. Irrespective of the formal categorisation, prison sentences should be envisaged only for the most serious forms of incitement to violent action;

– Redress under civil law should be made available as a less restrictive alternative, involving the possibility for victims of ‘hate speech’ and for NGOs to seek redress in the form of pecuniary and non-pecuniary damages, the right of correction and reply (for incidents of ‘hate speech’ in the media) and/or a public apology.

– The courts should interpret and apply all legal provisions restricting ‘hate speech’ in a manner consistent with the requirements of international human rights law, in particular, Articles 19 para 3 and Article 20 para 2 of the ICCPR (as interpreted in the Rabat Plan of Action). This involves interpreting the current definitions of prohibited ‘hate speech’ narrowly so that, wherever possible, they are narrowed down to advocacy of hatred amounting to incitement (подстрекательство) to discrimination,
hostility or violence;

– In determining if a particular statement falls under a prohibited category, analysis should never be limited to the language of that statement. The courts and law-3 enforcement authorities in charge of investigating ‘hate speech’ cases should always establish the speaker’s intent to cause prohibited consequences. Furthermore, they should always consider the likelihood of harm to be caused by the statement — and, to that end, the context in which it was made, its extent and magnitude, and the speaker’s position and their authority or influence over their audience;

– The courts and law-enforcement authorities should minimise their reliance on expert assessments in ‘hate speech’ cases. They should only seek expert opinion when specialist knowledge is truly needed to interpret or assess particular evidence. The courts should never substitute their own assessment for the analysis performed by experts;

– Judges, law-enforcement officials and other relevant officials (e.g. those involved in media regulation) should be provided with comprehensive and regular training on international human rights standards and comparative good practices relating to ‘hate speech;’

– In collaboration with experts and civil society, law enforcement authorities should develop investigative guidelines on the prosecution of ‘hate speech’ cases in line with international human rights standards.

Read the report in English

Read the report in Russian