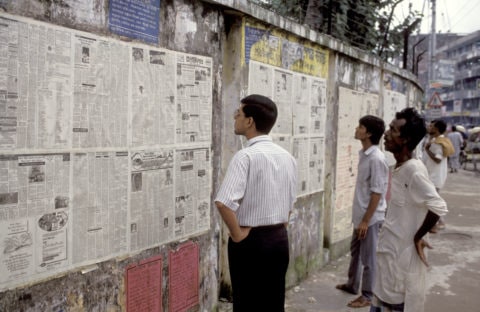 Daily newspaper posted to a wall for members of the public to read.

Despite international recognition of the need to protect journalists and communicators worldwide through UN resolutions and plans on impunity and the safety of journalists, there is an implementation and effectiveness gap between global agreements and local realities. This weakens the system and means the complex risks faced by journalists, media workers, and communicators remain unaddressed at the national level.

In Bangladesh, where 20 journalists were killed in just the last four years, this failure to address journalists safety and impunity has had serious consequences. ARTICLE 19 has highlighted the issue of increasing attacks against journalists, bloggers and human rights defenders and ongoing impunity as a major area of concern, in a submission for Bangladesh’s third UPR cycle.

This briefing examines the failures in investigations for journalists killed in Bangladesh, and provides recommendations to the government to end impunity.

Read the briefing in full.