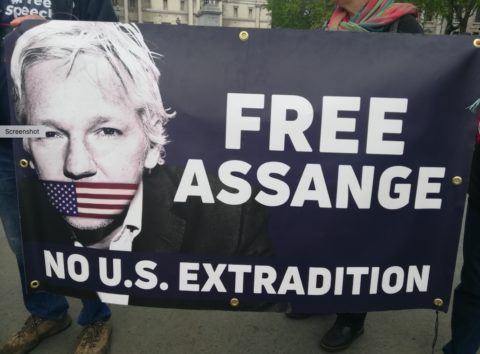 Banner campaigning against extradition of Assange to the US.

ARTICLE 19 has said that recordings of conversations between Julian Assange and his lawyers and other visitors, made during his stay in the Ecuadorian embassy, should not be used in his extradition case or any prosecution.

ARTICLE 19 also reiterated its call on the UK court to reject the extradition of the founder and publisher of Wikileaks to the US, where he faces charges that relate to the publication of Wikileaks material. If found guilty, Assange could face up to 175 years in prison.

“We call on the UK court to reject the extradition order that could lead to Julian Assange being prosecuted and potentially imprisoned for exposing human rights violations.

“If it is shown that illegal surveillance took place and that recordings were provided to the US authorities, it is further evidence that Assange is unlikely to receive a fair trial. His prosecution under the broadly worded Espionage Act is already problematic.

“The UK should not allow an extradition that would have severe consequences for investigative journalism and freedom of expression around the world.”

Assange will appear by video link for a case management hearing at Westminster Magistrate’s Court on Thursday December 19, 2019.

On Friday December 20, Assange will be interviewed by Spanish Judge, José de la Mata, as a witness in the prosecution of David Morales, owner of Spanish security firm UC Global. The company are accused of secretly recording Assange’s while he was living in the Ecuadorian embassy. In June 2019, Spanish newspaper El Pais revealed evidence of secret recordings, which included conversations between Assange and his lawyers. It is believed that the recordings were passed to the US authorities.

The full extradition hearing will begin on Monday February 24, 2020 at Belmarsh Magistrates’ Court.