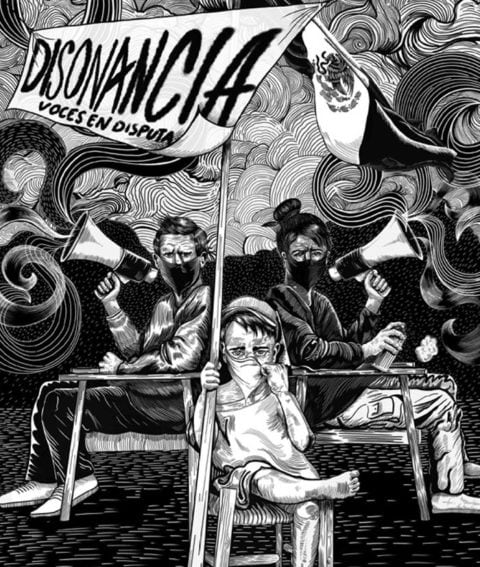 The struggle to be heard in a context of contradictory postures has led to increasing dissonance. Tensions exist between the voices that assume politics as dogma, those that no longer know where it comes from or what is the truth and all those who want to be heard. Against this background, ARTICLE 19 Office for Mexico and Central America published its 2019 annual report, Dissonance: Voices in Dispute

Information has become a sought-after commodity to which countless people now have access thanks to the digital age. Information technologies have allowed us to identify with the realities of others, across borders and across the world. We have become part of a global community facing similar battles and threats. We have empathised with those who do not speak our language, but who can express pain and terror just like us. We have witnessed in real time the atrocity, the repression and the rottenness of corrupt and unpunished governments that think only of themselves and not of their people. Some of us have come to accept that governments do not change or transform, societies do.

That commodity, which historically has been rationed and used in a discriminatory way in Mexico, and for which 47 journalists were killed during Enrique Peña Nieto’s administration and more than 60 billion pesos were spent on official advertising, gave us the power to demand change.

But in 2019, more than at any other time, information remained the object of war, the object of dispute. The practices used to control it in order to polarise, or by those in power, were reflected in the increase in attacks against journalists with the highest number in history: 609 in a year. This is apparent in discourse that stigmatises and seeks to strip the press of its readers and its audiences; in the networks that regurgitate hatred and discrimination with disinformation towards the most vulnerable or in the morning conferences that have become the arena, the pulpit and the court of the current President to influence the agenda and set the terms of public debate.

While it is true that there are more voices, there is no dialogue: instead there is dissonance. Expressions repel, collide, and reject each other. Each other’s thoughts are incompatible and there is a constant tension between ideas, beliefs and emotions. There is no place for dissent, nor for criticism. The difference, in this six-year term, is that this does not only happen between the government and the citizenry, but within society itself.

Each voice speaks from its own world and gradually withdraws from others. We polarise ourselves, believing that those who listen to us are the only ones that exist. Thus, we leave out those to whom we have decided to stop listening.

Dissonance: Voices in Dispute seeks to highlight the tension between the different voices and how it has become impossible to hear others that continue to fight to be heard. In its pages, we seek to account for the effects of the polarisation of thought and the need to take into account the different sides of a belief.

We also point out in this 2019 report what has changed for better or for worse within the context of the Andrés Manuel López Obrador government. Furthermore, we explore new trends that differ from the previous six-year term and re-establish the panorama of freedom of expression and the right to information, since they involve new analyses and approaches. Finally, we look at what remains the same and does not seem to have changed.

In the introductory chapter we highlight “the good”, “the bad” and “the ugly” of 2019. We examine the state of freedom of expression at global level, with an emphasis on corruption, impunity and inequality in Mexico, which if not reversed will make any transformation impossible. In the chapter “Journalism between stigmatisation and neglect” we warn about violence against the press, which, far from falling, has intensified and even normalised. In addition, we speak about the effectiveness of the presidential discourse to delegitimise and invalidate journalism through stigma and the effects that his words have on violence and impunity.

In Chapter 2 of “Trends in 2019”, We also warn about the issues we have identified if we continue on this path for the next five years:

1) Access to public information is centralised in the Presidency of the Republic and has not improved, the trend of the previous six-year term continues
2) Transparency is selective and discriminatory, the poor still do not come first
3) Public appointments continue to reflect the wishes of the ruling party and do not guarantee autonomy and counterbalances.
4) The President’s morning press conferences are a form of propaganda to shape public debate, they are not an information or accountability mechanism.
5) The recognition of the atrocities of the past is important, but it does not provide full justice nor does it absolve the State of its duty to remember
6) Disinformation is making Mexico a country which is intolerant of diversity and is generating adverse effects against the most vulnerable populations, mainly the migrant population.
7) Women took to the streets because nobody listened nor did anything: now is the time for civic disobedience.

In the third chapter, “Voices in the digital space”, we also highlight the way in which social networks quickly became a communication pillar of Andrés Manuel López Obrador’s Government, as well as the new forms of censorship that arise in the digital age. Finally, we close with a series of conclusions that allow us to identify the different tones of dissonance.

Dissonance: Voices in Dispute is also available online at disonancia.articulo19.org