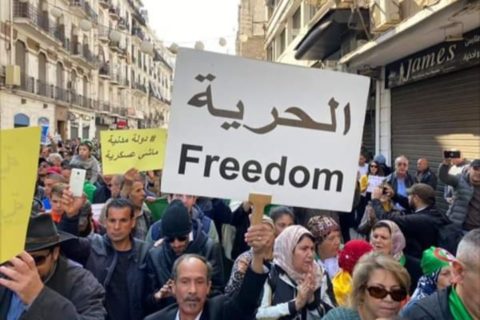 ARTICLE 19 calls for the immediate release of all those arrested amid the crackdown on Hirak pro-democracy protests. The Hirak protests, which broke out across Algerian cities in February 2019, were caused by the former president’s announcement to run for re-election while ill in hospital and widely considered unfit for office. Since they began, Algerian authorities have arrested more than a hundred protesters, journalists and activists, violating their rights to freedom of expression and association under the Algerian constitution and under international law. Since October 2019, police suppression of protesters in Algiers has involved violence: using riot gear and batons.

ARTICLE 19 urges the government to release all those charged for exercising their right to freedom of expression; and to stop its crackdown on dissent.

Pervasive crackdown on the right to protest

According to the Algerian League for the Defense of Human Rights, more than a hundred people have been arrested and detained in connection to the protests. The charges on which they are held such as ‘undermining the integrity of the national territory’ and ‘inciting assembly’ are vague, baseless and violate international human rights standards.

The scores of arrests that have taken place following marches and sit-ins include many human rights activists such as:

ARTICLE 19 is also deeply concerned by the authorities’ moves to block social media accounts, websites and other media they deem as dissenting. The ‘Algeria Stand Up’ (Algérie – Debout! ) Facebook group with more than 60,000 members was hacked and shutdown by the state. In August 2019, Netblocks, a study on Internet shutdowns found that Youtube and Google services were blocked by state-run Algeria Telecom and other Internet providers after a political opposition video was posted. In addition, countless journalists and media houses in Algeria have endured surveillance aimed to intimidate and censor independent media. One example is the independent and trusted journal Jeune Afrique whose May 2019 edition was blocked for its feature about the Chief of the Army entitled ‘The man who would threaten the revolution’.  This type of censorship casts a chilling shadow on freedom of expression in Algeria and prevents people from accessing vital information.