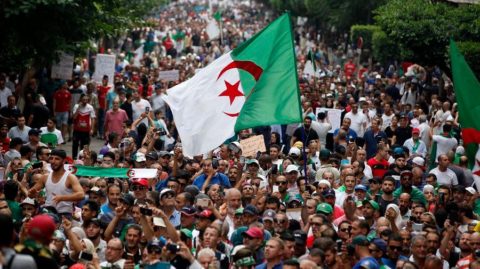 ARTICLE 19 urges the Algerian Ministry of the Interior, Local Authorities and National Planning to abandon recent measures taken against peaceful demonstrations in Algeria. In an already hostile environment for the right to protest and freedom of expression, new requirements on advanced notification for protests represent a concerning step by authorities to further silence criticism.

On 9 May 2021, an official statement by the Minister of Interior declared that “the organizers of marches are required to declare to the competent services the names of those responsible for organizing the march, the times of its start and end, the route and the slogans to be raised, in accordance with the law” on the pretext that it is “contrary to public order and the laws of the Republic”.

The measures create a serious restriction on the right to protest, in a period when authorities have been cracking down on protestors and journalists with dozens of arrests. The National Committee for the Release of Detainees (CNLD) has recorded at least 350 arrests of demonstrators, journalists and activists since February 2021, simply for being peacefully involved in the Hirak movement. Many of them have spent more than a week in detention and most of them are in pretrial or judicial review. On 14 May, authorities also arrested at least 15 journalists covering protests in downtown Algiers, all of whom were released later that day.

“The latest efforts by the Algerian government to restrict the space for protest and dissent appears to be in direct response to recent protests criticising the government itself, and intended as another tool for the government to use in silencing the Hirak movement. Using notification regimes to repress the right to protest is in clear violation of human rights standards, and the Ministry should withdraw this requirement immediately”, said Saloua Ghazouani, Director of ARTICLE 19 MENA.

States should only seek notification of protests where it is necessary to enable planning for the facilitation of such protests, and spontaneous protests, such as those which have been happening among students in Algeria in recent weeks, must be exempt from such rules. Requests for notification of details such as the ‘slogans’ to be used in protests violate the protections of human rights laws on freedom of expression and protest, which require any restriction to be necessary to achieve a legitimate aim – it is unclear what purpose such a notification would serve beyond enabling authorities to crack down on specific types of protest.

The goals of the Hirak movement are the guarantee of rights and freedoms in their entirety, and the government must respect the will of the people to demonstrate peacefully for change. Asking the demonstrators to file an application with details such as the slogans they will carry remains a clear violation of this freedom, especially in a hostile atmosphere in Algeria for freedom of expression.

ARTICLE 19 remains concerned at the escalation of repression in Algeria. Security forces must cease the arrest of protestors and journalists covering protests, and must not use violence against activists peacefully speaking out for their rights. We urge authorities to withdraw the administrative note published by the direction of the regulation of the general affairs and litigations  directed at the Head of the Algerian State Security enabling him to deploy force  from 8 May to 7 June to stop demonstrators.

Together with a number of regional and national civil society, ARTICLE 19 has joined condemnation of the serious deterioration of the situation of human rights and individual and collective freedoms and the unprecedented worsening of the repression against Hirak activists and journalists, including Said Boudour, Jamila Loukil and the president of the  office of Algerian League of Human Rights in Oran, Kaddour Chouicha with allegations of terrorism.

“The situation in Algeria is very alarming. Fundamental freedoms continue to be violated, and the reasons why the Algerian people went out to demonstrate are still relevant. The new government has done little to break with the approach of the previous dictatorship. On the contrary, repression is hardening, human rights are muzzled, the public space is closed. We call on the government to reverse this trend and listen to the concerns of the people, instead of seeking to silence them’’  added Ghazouani.