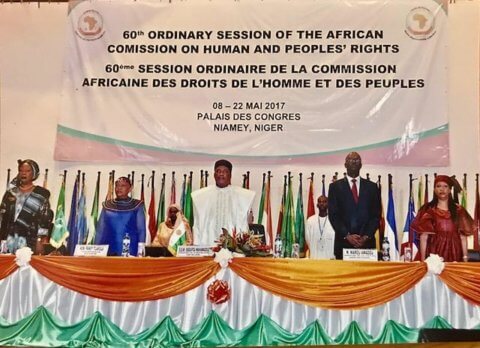 On 25 April, the African Commission on Human and People’s rights will hold its 62nd ordinary session in Nouakchott, Mauritania, to discuss the situation of human rights across the continent, including freedom of expression. From 21 April, NGOs from Africa and beyond will join the pre-session NGO Forum, to discuss issues to be raised in the main session. Key amongst these will be the situation of freedom of expression and access to information on the continent.

ARTICLE 19’s Eastern Africa team will be present during the NGO Forum and the main session to advocate for the adoption of progressive access to information and freedom of expression standards, while also urging state parties to put an end to impunity for attacks on journalists, human rights defenders, and others exercising their right to free expression in Africa.

Our priorities for ACHPR 62 are:

The situation of freedom of expression has been on the decline in most countries in the Eastern Africa region, owing in part to turbulent socio-political currents in the region. ARTICLE 19 will be raising our concerns on several countries where this decline has been most concerning. We will address the session during the review of Eritrea’s initial report to the Commission to highlight the dire situation for free expression in the country, and will be advocating for accountability throughout the session for recent media freedom violations in Tanzania and Kenya.

While we welcome the long overdue submission by the Eritrean government of its report to the ACHPR on the situation of human rights in Eritrea, assessing its progress towards the guarantee of the rights laid out in the Banjul Charter, there remain serious questions of accountability for freedom of expression violations in the country, which has made little progress in recent years.

We will be addressing the state and Commission to push for the release of approximately 60 journalists, human rights defenders (HRDs) and others arbitrarily arrested and detained by the regime since 2001 for expressing their opposition to the systematically entrenched oppression by the state. In this regard, we will be calling for implementation of the Article 19 v Eritrea (2007) decision that ordered for the unconditional release of all journalists and HRDs detained by the state. We will also be advocating for the government to open up media ownership to non-state actors to encourage media pluralism as a step towards the enjoyment of the right to free expression for all Eritreans.

Freedom of expression plunges in Tanzania

Since 2015, freedom of expression has significantly deteriorated in Tanzania with TV, newspapers, and radio stations closed for airing content deemed unsavory by the state.

There has also been the enactment of a litany of laws that encourage self-censorship by introducing criminal sanctions for certain types of expression both online and offline. These have even led to the imprisonment of parliamentarians who have openly stated their opposition to the activities of the state.

The country also passed an Access to Information law in 2016 with a clause that heavily sanctions wrongful disclosure of information, while not sanctioning the wrongful withholding of information, meaning it fails to guarantee access to information in any meaningful way.

Spotlight on media violations in Kenya

The 30 January 2018 shutdown of three major TV stations in Kenya is by far the biggest indication of the increasingly alarming level of state interference in media freedom in the country.

There are also significant concerns about increased impunity for attacks on journalists and HRDs in the country, in addition to the close to 100 people who were killed in protests during the instability of the election period.

ARTICLE 19 was one of the lead organizations involved in pushing for the adoption of the Declaration on Freedom of Expression in Africa in 2002. In 2012, Section IV of the Declaration was expanded to include access to information provisions. Since then, over the years, both the Commission and CSOs have agreed that the Declaration needs to be revised to make it capable of addressing freedom of expression in a much more evolved telecommunications environment.

At ACHPR 62, we’re pushing for the adoption of guidelines or general comments on the Declaration to include our principles on pertinent expression issues in the digital age, including data protection and privacy as safeguards of expression online, addressing internet shutdowns, mass surveillance, and regulation of speech in online platforms in line with international standards. The Declaration is already a crucial tool for the promotion of freedom of expression and access to information in the continent, with the Commission making reference to it during the review of periodic and national reports delivered by state parties. The revised Declaration will go further in clarifying what obligations states have regarding promoting expression in online spaces.

Additionally, we will be participating in the launch of Guidelines on Elections and Access to Information in Africa. Having been part of the process of the drafting and adoption of the guidelines, we will be addressing the forum on critical information that ought to be disclosed proactively by Electoral Management Bodies, and that ought to be disclosed upon request. Access to information regarding elections is not only key to promoting integrity of the electoral process but also in ensuring voters are well informed about the procedure.