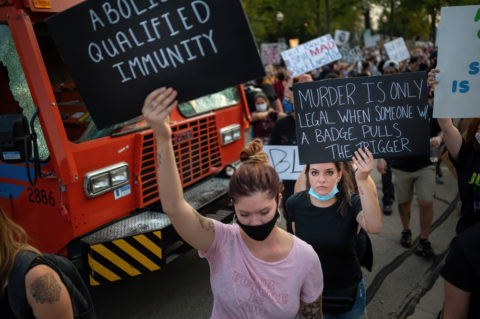 The response of US law enforcement to the protesters in Kenosha, Wisconsin raises deep concerns about how the right to protest is policed at a time of shocking acts of racism, intolerance and violence.

Alongside reactionary rhetoric on law and order is the failure of the authorities to protect the protestors murdered on Tuesday night (25th August) by a member of a vigilante militia. Banning protest is never the answer.  Instead, authorities must protect and enable protest, and take proportionate and specific actions against individuals who violate the law, rather than adopting discriminatory practices that promote fear. A failure to do so is a failure of governance.

‘The shooting of Jacob Blake by the police and the murder of protesters by a vigilante in Wisconsin lays bare the chronic failures of governance and accountability in the United States.

“The right to protest must be protected and authorities must abide by international standards on the policing of protest.  The failure to protect the two protestors murdered yesterday by a vigilante militiaman, as well as the numerous protestors who have been injured or arbitrarily detained by police at protests in recent months, highlights the urgent need for these standards to be implemented.

“We call on the authorities to end discriminatory violations of the right to  protest, and hold those responsible to account.”