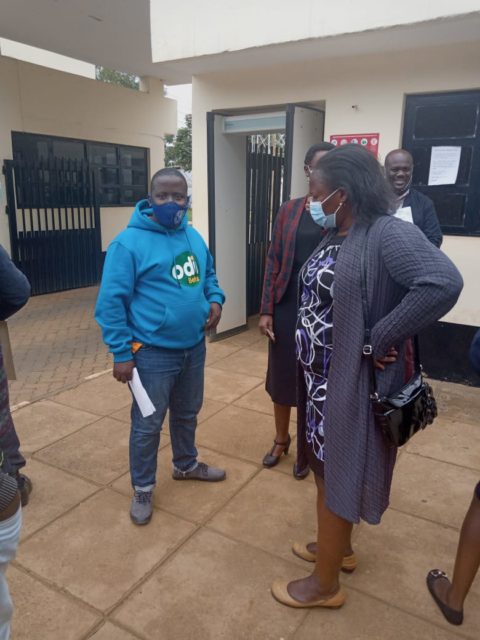 Milton Were, after his release on Thursday 20 August 2020, at DCI Headquarters Nairobi.

ARTICLE 19 Eastern Africa urged the Kenyan authorities today to release Milton Were, a blogger/freelance journalist who runs the Kenya Today website. Were was re-arrested with his cousin Robert Ouko by officers from the Directorate of Criminal Investigations (DCI) on Sunday 23 August 2020.

“We call for the immediate release of Were and five other bloggers by the DCI. We are extremely concerned that the DCI, which had given Were summons to appear before them on Wednesday 26 August, opted to re-arrest Were in extremely unclear circumstances,” said Mugambi Kiai, Regional Director of ARTICLE 19 Eastern Africa.

Were had been conditionally released three days earlier together with Jack Okinyi, a Kenyan editor who runs the Business Illustrated website and the @kenya_business twitter handle. Okinyi and Were were unlawfully detained for two days by officers from the Directorate of Criminal Investigations (DCI), Operations Branch, which hosts the Field Services and Special Crime Prevention Unit, without any official charges being lodged.

Okinyi was arrested in Nairobi at 1PM on Tuesday 18 August 2020 while Were was arrested shortly thereafter, at 5PM. Okinyi maintains that he was driven around by police officers, who proceeded to confiscate his phone. During this time, Okinyi claims that he was assaulted by the arresting police officers, who placed a black plastic bag over his head and a belt around his neck, and proceeded to choke him, in a bid to get him to disclose the whereabouts of Were, which Okinyi refused to do.

Were was arrested in Mlolongo, Machakos County where, he claims, the police officers entered into his property, failed to identify themselves and produce an arrest warrant. He said they also confiscated his phone and two laptops which he relies on to earn a living.

Okinyi and Were both confirmed that they were driven around from Mlolongo to Eastleigh, Nairobi County and then to Pangani and Muthaiga Police Stations where unsuccessful attempts were made to place both journalists in their custody just before midnight, on Wednesday 19 August, 2020. The two were finally placed in the custody of the Capitol Hill Police Station, under OB No. 3/19/08/2020, at midnight on Wednesday 19 August, 2020. Okinyi and Were were later released into the DCI’s custody on the same day, as indicated by OB No. 24/19/08/2020.

Media reports indicate that their arrest was linked to a blog post – which is conspicuously unavailable on the Kenya Today page – about a billion-shilling road tender corruption scandal allegedly involving a senior Kenya Urban Roads Authority official, her husband and Banisa Member of Parliament. Reports indicate that the complainant had pressured Kenya Today staff to re-edit the main story. It is noteworthy that the original post was pulled down, corrected for alleged inaccuracies, and subsequently re-published, before the arrests.

Okinyi and Were were finally brought to Kibera Law Courts on Thursday 20 August, 2020. Positively, prosecutors from the Office of the Director of Public Prosecution (ODPP) refused to be co-opted into this unlawful process, rejected the charge sheet (Police Case No. 121/167/20) and directed the complainant to file civil charges. The DCI, during Okinyi’s and Were’s conditional release, proceeded to issue summons of appearance, but retained their electronic devices, including mobile phones and laptops.  On Monday 24 August,  the ODPP  again rejected the charges brought against Were during a plea-taking, which was postponed to Tuesday 25 August 2020.

ARTICLE 19 EA decries the continued use of the notoriously problematic section 23 of the Computer Misuse and Cybercrimes Act (CMCA), 2018 to intimidate, harass, and arrest digital technology users, bloggers and media personnel. This same provision was used against Okinyi and Were, and forms the basis for Were’s re-arrest on Sunday 23 August. ARTICLE 19 EA confirmed that Were is being charged alongside five other bloggers.

Section 23, coupled with section 22 of the CMCA, 2018, continues to grant dangerously wide powers to DCI and other State security agents, who rely on these provisions to abuse due process and constitutional protections under the guise of addressing the publication of false information ‘likely to discredit the reputation of individuals.’

“We are extremely concerned about the government’s regressive use of archaic methods to stifle public commentary on corruption scandals, using tactics which are reminiscent of colonial Kenya and post-independent authoritarian practices. Increasingly, the authorities arrest individuals and keep them in detention for days without formal charges, which is an affront to human rights protections in Kenya,” said Mugambi Kiai, Regional Director of ARTICLE 19 Eastern Africa.

Positively, Okinyi’s and Were’s first conditional release was enabled by the collaboration by, and support from, civil society organisations including the Kenya’s bloggers association and individual Internet users, acting in their personal and professional capacities, physically and on social media platforms.

ARTICLE 19 Eastern Africa calls on the DCI to immediately release Milton Were and refrain from arbitrarily  re-arresting Were. We also call for an investigation into the arbitrary arrest and detention of Were’s cousin, Robert Ouko, who was released on Monday 24 August, 2020.

We also call on the DCI to refrain from arbitrarily summoning, arresting and detaining Internet and digital technology users who use offline and online platforms to enrich governance conversations in Kenya. The rights to free expression, assembly and association, privacy and access to information cannot be restricted unless a legitimate, necessary and proportionate justification exists, as stipulated under Article 24, Constitution of Kenya (2010).

ARTICLE 19 Eastern Africa calls on the government to revise contentious provisions in the CMCA, 2018 and bring them in line with Kenya’s international human rights obligations, to ensure that its vague provisions are not used to harass and intimidate digital technology users, including bloggers, journalists and editors.

ARTICLE 19 Eastern Africa calls on the National Police Service and the Independent Policing Oversight Authority to investigate Okinyi’s and Were’s unlawful detention and the allegations of ill-treatment and take steps against any police officers suspected of violating their rights.