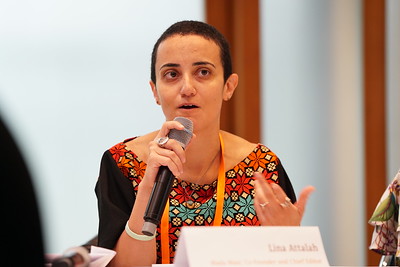 ARTICLE 19 has called for the Egyptian authorities to drop all charges against Lina Attalah, editor-in-chief of the Mada Masr website. Attalah was arrested on 17 May outside the Tora Prison in Cairo; she had been interviewing Laila Soueif, the mother of jailed activist Alaa Abdel Fattah. Her arrest is part of a targeted crackdown on dissent under President el-Sisi’s government.

“Attalah’s arrest is an attack on one of the few independent media outlets in Egypt. It is part of the Egyptian authorities’ ongoing use of arrest and detention to silence those who are trying to hold them to account.”

“We call on the authorities to drop the charges made against Lina, and also to end their crackdown on freedom of expression and dissent.”

Attalah has been arrested previously; along with two colleagues, she was detained for a short while in November 2019, after the security forces raided Mada Masr’s offices.

Abdel Fattah, who frequently wrote for Mada Masr, has been on hunger strike for over a month in protest at his continued pre-trial detention and the conditions in which he is being held.

In February, activist and researcher Patrick George Zaki, was arrested at Cairo airport returning to Egypt for a family visit.