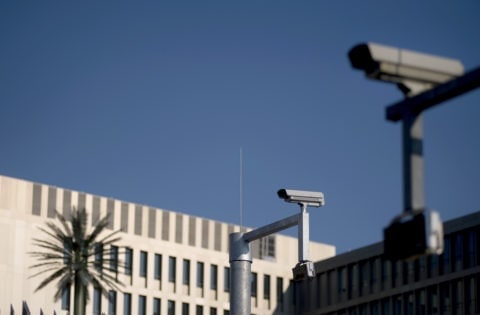 Surveillance cameras and an artificial palm tree in front of the newly built headquarters of the Bundesnachrichtendienst BND, the German intelligence service agency.

The global outbreak of coronavirus is leading many States to use emergency powers to attempt to tackle the crisis, limit the virus’ transmission, and protect the public. While the pandemic requires strong responses, we need to ensure that States do not normalize oppressive surveillance and undermine human rights more widely, including the right to freedom of expression and information and the right to privacy.

The World Health Organization’s characterization of coronavirus as a pandemic on March 11 triggered the declaration of a state of emergency in many countries, opening the door for governments to exercise extraordinary powers. Many States’ interventions, ostensibly to control the spread of the virus, have and will continue to have an enormous impact on people’s human rights. Quarantines inevitably limit people’s freedom of movement and freedom of assembly. But some governments are also deploying apps and other technological tools to surveil people’s movement, and their contacts with others, in order to be able to reconstruct, and block, transmission chains.

For example, Israeli Prime Minister Benjamin Netanyahu has announced that technology used to tackle terrorism could be used to track and monitor the spread of the virus. After being petitioned by civil rights advocates and Arab lawmakers, Israel’s Supreme Court stepped in to ensure parliament could set up a supervision mechanism. The Chinese government, in cooperation with the state-owned China Electronics Technology Group Corporation, launched a “close contact detector” app that allows people to check whether they have been at risk of catching the coronavirus. In South Korea, several coronavirus apps allow people to monitor the number of confirmed COVID-19 patients and their movement. In the United States, the private company Athena Security is launching  “artificially intelligent thermal cameras” that it says can detect fever in people, as well as alerts that they might have coronavirus. These would be used in public and private spaces alike, such as hospitals or grocery stores. Also, the New Orleans emergency services started to use mobile phone surveillance tools, developed partially by former members of Israel’s military intelligence, to “identify situations where they’ll be at high risk of contagion from the virus”. In the United Kingdom, some scientists called on the U.K. and other E.U. governments to develop similar mobile apps as in China.

Understandably, many people desire to take extraordinary measures to tackle the coronavirus, but the deployment of various apps for real-time tracking of people’s movements and interactions, deployed without an informed users’ consent and without adequate information and safeguards to human rights, are extremely problematic. They also show that now, States tend toward the ‘easier’ option of surveillance and other violations instead of putting in place the institutions and systems that would protect the public in the long term, like strong healthcare systems and public health information.

The international human rights framework recognizes the protection of public health as a legitimate reason to restrict people’s rights, including freedom of expression and privacy. At the same time it mandates that restrictions must meet certain standards. In other words, States must prove that the restrictions are appropriate and narrow, and that there are no alternatives to achieve the same protective function. Restrictions also must be temporary and subject to periodic and genuine review before any extension.

The use of apps that aim to collect information about individuals infected with coronavirus, track their exposure to others, and track individuals’ movements would fall under exemptions allowing limitation of human rights on the grounds of protecting public health. However, we need proper guarantees about how these apps work and are used, and what data is collected, where it is being stored. We also need to know how the data is processed, by whom, for which purpose, and with whom it is shared. Last but not least, we need to know whether the intrusions on human rights they present are truly necessary and proportionate.

It is of utmost importance to remember that heavy-handed techniques of mass surveillance still violate our human rights, even if governments claim they can “protect” people. Fear and public health crises should not make institutions blind to human rights concerns, nor should they stop us from looking for human rights-compliant solutions. In other words, a global health crisis should not be used to normalize oppressive surveillance measures, which do not comply with international human rights standards. States shouldn’t ask people to completely sacrifice privacy and civil liberties on the altars of a public health crisis, if other alternatives are available; nor should private companies be allowed to do so.

It has already been proven in the past that governments and security agencies find emergency powers attractive, because they create short-cuts. States might exploit trends of insecurity, vulnerability, and risk, to keep, on a persistent and permanent basis, their emergency powers. We have seen this happening with counterterrorism responses, where exceptional powers to restrict people’s rights and freedoms have been normalized and the general public has been led to accept it. In the case of coronavirus, States might be even more tempted to do so considering that COVID-19 might become a “permanent part of repertoire of human viruses” at least till there is likely to be a vaccine or a cure.

The protection of human rights is not a luxury that can be granted only when there are no other public interests at stake. The international framework on human rights provides a series of safeguards and guarantees that States must respect even when they have legitimate reasons to limit these rights. Tracking of the disease must not coincide with the total surveillance of individuals. People’s fears and desire for protection in times of crisis should not be used to overtake the human rights-protection requirements, in either the short or long term.

More importantly, we must all be aware that surveillance technology can never be the only response to underlying problems we are facing in the world. Public health crises will not be solved through surveillance of individuals. Any technological solutions to fight COVID-19 must be accompanied by complex offline measures, such as robust health care systems or public health interventions, including testing. These require full and comprehensive information, transparency, and cooperation and solidarity within society at large.