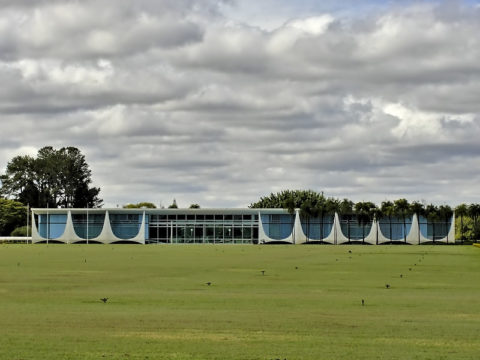 ARTICLE 19 Brazil and South America and a coalition of NGOs have filed a civil action against Brazil’s federal government over its failure to provide security measures and ensure a safe environment for reporters covering the Alvorada Palace. The Palace, which is the official presidential residence and known colloquially as the “playpen”, is used by President Jair Bolsonaro to give statements and interact with his supporters.

At the start of June,  several media outlets, including Globo, Folha and Metropoles, announced that their journalists will no longer be able to report from the presidential residence due to the high risk of attacks from Bolsonaro’s supporters.

In response to concerns raised by Brasília’s Union of Professional Journalists, the Institutional Security Office (GSI) adopted new security measures and reorganised the space, separating journalists from the president’s supporters. However, the initiatives were not sufficient to keep journalists safe. In a conversation recorded by the Bandeirantes media group, General Augusto Heleno, head of GSI, said that he would not curb threats and verbal attacks and that journalists had to “pretend they didn’t hear” anything offensive.

Filed on June 30th, the civil action points out that these attacks are not a one off. Since since Bolsonaro’s presidential inauguration 18 months ago, there have been countless reports of abusive treatment towards the press by the president, his family, ministers and supporters.

The filed document points out that the protection of media workers is, above all, a guarantee of the right to freedom of expression, a fundamental pillar for the proper functioning of democracy and a prerequisite for the exercise of citizenship.

The lawsuit lists President Bolsonaro; Head of GSI, General Augusto Heleno; Minister of Communications, Fábio de Faria; and the chief of the Secretariat of Social Communication (Secom), Fabio Wajngarten as responsible for promoting security measures at the Alvadora Palace.

It is now up to Brasilia’s court to rule on the civil action.

The civil action was signed by ARTICLE 19 Brazil and South America, Brasilia’s Union of Professional Journalists, the Vladimir Herzog Institute, the National Federation of Journalists (FENAJ), the Intervozes Collective and Reporters Without Borders (RSF). The initiative arose from the National Network for the Protection of Communication Professionals, a project that brings together organisations from all over Brazil and that develops strategies to tackle the  violation of freedom of expression in the country.