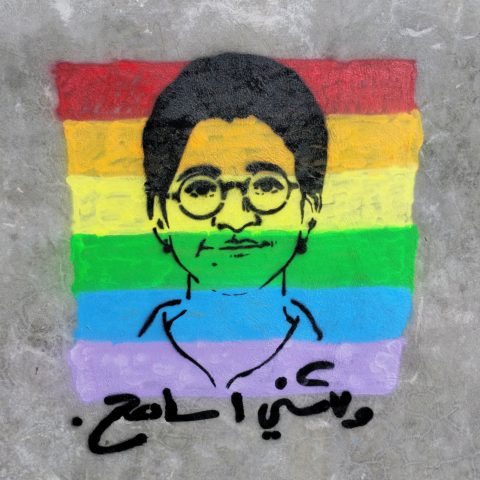 A mural of Sarah Hegazy in Amman, with the words she left in her final note "but I forgive". Photo credit: Flycatchr

ARTICLE 19 pays tribute to Queer Egyptian activist, feminist and software developer Sarah Hegazy, who took her own life at age 30, on June 13 2020, in Toronto, Canada.

Hegazy will continue to be known and admired for her legacy of activism, community building and challenging structures of class and power. We share our solidarity with her loved ones and the communities she supported, especially those in Egypt.

Hegazy was arrested in October 2017 for waving the rainbow flag at a concert by Lebanese rock band Mashrou’ Leila concert in New Cairo. The lead singer of the band, Hamed Sinno, is one the MENA regions few openly gay musicians.

After the concert, one of the biggest crackdowns on the Egyptian queer community was enforced, with 75 people, including Hegazy, being arrested. Egyptian LGBTQ organisation, Bedayaa, reports that the 75 were charged with charges of ‘habitual debauchery’, ‘incitement to debauchery’, and ‘public indecency’ under the Law 10/1961 on Combating Prostitution – largely used against queer individuals in Egypt.

Hegazy’s  image waving a rainbow flag in Egypt became a symbol of existence and resistance for the queer community, shared widely on social media. In an interview, she explained that moment: “I was declaring myself in a society that hates all that is different from the norm.”

The same image was used as part of a homophobic public outrage campaign, which led to the massive crackdown and was also used as part of the evidence based against her in court.

Hegazy spent three months in detention under the 1961 Law. During that time, she was subjected to torture, including the use of electric shocks, solitary confinement, sexual assault and verbal abuse. When she was finally released, she still faced criminal charges that could have seen her imprisoned for up to 15 years. Suffering from post-traumatic stress disorder (PTSD) and facing increased threats against her life and liberty, she sought asylum in Canada.  She continued to be an outspoken activist for a number of causes but still suffered from PTSD and was isolated from being in exile.

Hegazy’s experience of torture and abuse is similarly reflected and experienced by many other queer people in Egypt.

On the year anniversary of her exile in Canada, she wrote, “Even after my release, fear of everyone, family, friends, and the street continued to haunt me.” She also declared: “A year after the Mashrou’ Leila concert, a year after [Egypt’s] biggest security attack against gay people, a year after I announced my difference (Yes, I am a gay), I have not forgotten my enemies. I have not forgotten the injustice that left black spots carved in my soul and bleeding, spots that doctors had never been able to treat.”

In her final note, she left a lasting message for her abusers and prosecutors:

“To the world, you’ve been greatly cruel, but I forgive.”

Those who arbitrarily detained, tortured and abused Sarah Hegazy were never held to account. In fact, there has been no accountability for the abuse suffered in Egyptian detentions and prisons, especially by people from the queer community.

Persecution of LGBTQ communities in Egypt

Egypt has a long and prolific history of criminalising and prosecuting the queer community. Since Abdel Fattah al-Sisi took power in 2013, the authorities have increased their attacks on LGBTQ people with the Egyptian Ministry of Interior introducing new campaigns to target them.

A 2017 report by Egyptian Initiative for Personal Rights, documented that 232 LGBTQ people were arrested and prosecuted  between 2013 -2017 —  a fivefold increase. In 2019, there were 92 arrests alone. And they haven’t stopped during the coronavirus pandemic, with at least 17 arrests during the lockdown.

The Egyptian police have been prolific in using the internet to target the LGBTQ community, especially with the shift in people using apps to meet others. ARTICLE 19, the Egyptian Initiative for Personal Rights and Bedayaa have reported on the uses of tools such as queer dating apps, as well as street level arrests to identify, target, entrap and imprison people based on their sexual orientation or gender identity. We have called upon companies and the apps used in this targeting to uphold their responsibility to communities and place more efforts to guarantee their safety.

Solidarity with LGBTQ organisations and groups in Egypt

ARTICLE 19 joins calls in solidarity with LGBTQ organisations and groups in Egypt. Bedayaa, one of the main LGBTQ groups working in Egypt reiterates that “‘PRIDE rises from oppressions‘ and have the following demands in honour of Sarah Hegazy and countless others who have suffered solely based on existing while queer in Egypt: