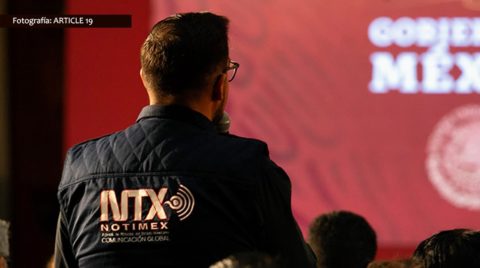 Aristegui Noticias, ARTICLE 19 Mexico and Signa_Lab ITESO have seen videos and images that indicate NOTIMEX director Sanjuana Martinez Montemayor orchestrated attacks against journalists, ex-employees and managers of the agency and its critics.

The analysis of two WhatsApp chats, “Fiesta de Halloween” and “SOS”, suggests Martinez coordinated attacks on Twitter. The chats specified what, how, and who to attack, using both anonymous and official accounts.

“Today, we have published further evidence that the Director of NOTIMEX carried out coordinated attacks on journalists and other critics of the state news agency.

“The Mexican Government can no longer remain silent. They must investigate both the attacks and the misuse of public resources that allowed them to be carried out.

“We also call on the Government to protect the journalists that raised their voices, as well as staff from Article 19 Mexico, Aristegui Noticias and Signa_lab ITESO, from further retaliation and attack.”

On May 12, 2020, ARTICLE 19, SignaLab and Aristegui Noticias published a report that showed Martínez had used public resources to coordinate a series of attacks on social media against journalists who were critical of the agency and the current government. The new evidence suggests a broader strategy of attacking and discrediting.

The WhatsApp chats include evidence that Martinez tried to pressurise staff into taking part in her campaigns, saying on one occasion:  “We all have an obligation to clamp down on bad employees… Especially those who betray and attack the agency in one way or another… Please it’s them or it’s us. It’s that clear”.

One member of staff, who withheld their identity for fear of reprisal, stated: “Deputy directors and directors are coerced and pressured to use their accounts to attack whoever Sanjuana says, to give retweets, among other actions”.

In addition to orchestrating attacks on Twitter, Martínez used chats to direct and undermine the independence of  NOTIMEX’s editorial line. As Aristegui Noticias reported, Martínez ordered journalists not to publish content about certain institutions and officials. This biased editorial policy by a public media organisation affects the Mexican public’s right to information. It also contravenes Article 6 of the “Law that creates the News Agency of the Mexican State”, which states that: “all information generated or transmitted by the Agency through any media, must be done […] under the principles of truthfulness, impartiality, objectivity, plurality, equity and responsibility”.

The use of anonymous accounts

The Signa_lab ITESO has published a new study that extends the analysis of accounts that were used to attack critics and generate positive messages for Martinez. The study concludes that the accounts, both those that have been deleted and those that remain active, were a coordinated network of profiles used by NOTIMEX members and/or third parties and not automated accounts (bots).

After the publication of ARTICLE 19’s first report, Martinez tweeted that she would take legal action against those who have damaged her reputation and honour. These types of threats reduce public debate. We remind Martinez that, as a public servant, she is subject to a higher level of scrutiny than other citizens.

The Human Rights Council Resolution 39/6 on safety of journalists, adopted in September 2018, expressed alarm at instances where political leaders, public officials and authorities have denigrated, intimidated, or threatened the media, including individual journalists. It urged them to refrain from such actions and clarified that these attacks aren’t simply rhetorical but they expose journalists to greater risks, and undermine public trust in the credibility of journalists and respect for their independence.