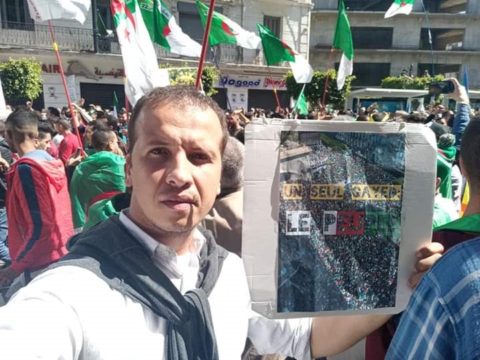 Algerian activist Ibrahim Daouadji was  arrested on March 16, 2020 in the city of Mostaganem when he was in his car, and he was escorted into police custody in the capital in mysterious circumstances. On Tuesday March 17, Ibrahim informed, during a phone call to his family, that he was at the Bab Al Jadid police station and that he would be presented to the public prosecutor without specifying the court.  The call ended and his family was unable to obtain more information.[1]

Many lawyers have traveled through the capital’s courts without finding any trace of Ibrahim Daouadji or providing them with information about his arrest or detention. On March 19, Ibrahim Daouadji appeared before a judge of the Sidi M’hamed court, without notice and without informing his lawyer, and was placed under warrant by the investigating judge. His trial has been postponed until April 2[2].

“We remind the judicial authorities that the articles 56 and following of the Algerian Constitution guarantee the right to a fair trial and the presumption of innocence, in particular article 60, which gives the person remanded in custody the right to get in touch with his family immediately and also to contact his lawyer. These rights are not only a guarantee for individuals, but they also constitute the essence of the judiciary which is the natural guardian of rights and freedoms, and therefore their violation is in fact a violation of the judiciary”

ARTICLE 19 reaffirms[3] its position on the arrest of activist Ibrahim Daouadji and calls on the judicial authorities to release him and to stop criminal proceedings contrary to article 51 and following of the law of criminal proceedings. ARTICE 19 also joins the appeals of the Algerian League for the Defense of Human Rights (LADDH) and the National Committee for the Liberation of Detainees (CNLD) to ask respect for the rights and freedoms of activist Ibrahim Daouadji.

ARTICLE 19 recalls the need to respect the penal proceedings which represent the formal protection of rights and freedoms against any offense and warns from the danger of violating the fundamental principles of justice in Algeria and the damage to the principle of separation of powers.